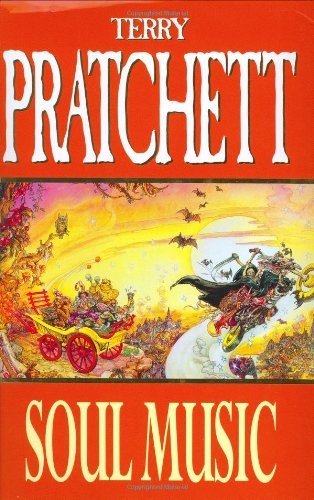 Other children got given xylophones. Susan just had to ask her grandfather to take his vest off. Yes. There's a Death in the family. It's hard to grow up normally when Grandfather rides a white horse and wields a scythe - especially when you have to take over the family business and everyone mistakes you for the Tooth Fairy. And especially when you have to face the new and addictive music that has entered the Discworld. It's lawless. It changes people. It's called Music with Rocks In. It's got a beat and you can dance to it, but...It's alive. And it won't fade away.

"'Pratchett lures classical themes and popular mythologies into the dark corners of his imagination, gets them drunk and makes them do things you wouldn't dream of doing with an Oxford don'" (Daily Mail)

"'Very clever madcap satire which has universal appeal. If you haven't tried him, this is a fun one to start with'" (Today)

"'The great Terry Pratchett, whose wit is metaphysical, who creates an energetic and lively secondary world, who has a multifarious genius for strong parody ... who deals with death with startling originality. Who writes amazing sentences'" (A.S. Byatt New York Times)

"'Like Jonathan Swift, Pratchett uses his other world to hold up a distorting mirror to our own, and like Swift he is a satirist of enormous talent ... incredibly funny ... compulsively readable'" (The Times)