Items related to That Was Satire, That Was: Beyond the Fringe, the Establishm...

Carpenter, Humphrey That Was Satire, That Was: Beyond the Fringe, the Establishment Club, "Private Eye" and "That Was the Week That Was"

That Was Satire, That Was: Beyond the Fringe, the Establishment Club, "Private Eye" and "That Was the Week That Was" 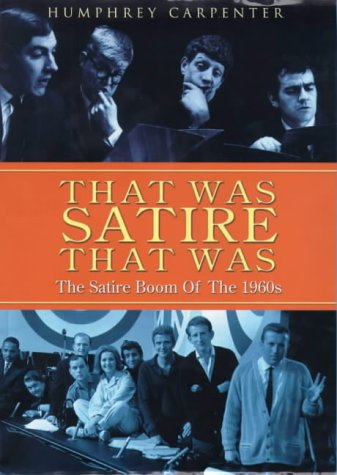 Forty years ago, at the 1960 Edinburgh Festival, four young men - Peter Cook, Dudley Moore, Jonathan Miller and Alan Bennett - walked on to a stage and the change the face not merely of British comedy but of social attitudes in this country. Beyond the Fringe was iconoclastic, fracturing the 'culture of deference' which had predominated in the 1950s. It was the forerunner of an explosion of satire which included The Establishment Club, Private Eye and the BBC's daring weekly satire show, That Was the Week that Was. Award-winning biographer Humphrey Carpenter evokes the atmosphere of 1950s Britain and the social and political conditions which enraged and inspired the satirists, and brings vibrantly alive this amusing but also key period of British cultural life. The book is based on original, in-depth interviews with most of the key personalities, including Alan Bennett, Jonathan Miller, Richard Ingrams, Barry Humphreys, Ned Sherrin and the late John Wells. It includes sketches from Beyond the Fringe which never made it to London, and much of the hilarious material which went into TWTWTW, as well as fascinating material from the BBC archives.

Life in post-war Britain was a fairy tale--grim. The first teenagers were ripe to exploit an austere, recovering Britain, which they saw as stale and complacent. Enter the Bright Young Things: Alan Bennett, Richard Ingrams, Willy Rushton, Jonathan Miller, David Frost, Dudley Moore and Peter Cook. Their combined energies gave rise to now-legendary endeavours such as Beyond the Fringe, the club The Establishment, That Was the Week That Was (TW3) and Private Eye. For the post-Goon generation, these young satirists tore up the rulebooks with a sneer worthy of their Restoration precursors. Ribald, clever undergraduate humour touched nerves people didn't know they had, and within weeks, hundreds of unsolicited scripts were being received from hopeful sixth formers. Everyone wanted to be funny. Today, everyone is. "Satire is now an industry," laments one, the producer of Have I Got News For You.

It's hard now to imagine the impact such irreverence made, but author and broadcaster Humphrey Carpenter does his best to bring the era alive. The halcyon days of the Satirical 60s were short, primarily between 1961, when Beyond the Fringe opened, and the end of 1963, when the BBC took TW3 off air. Drawing on personal interviews, scripts and assorted memoirs, Carpenter pieces together the creative processes, the different personalities and the inevitable frictions. Lurking among the soundbites, sideswipes and reappraisals is the ghost of Peter Cook: the most natural star, inspirational, yet doomed to a frustrated, alcoholic demise. Carpenter does not have space to do detailed personal justice to these complex, fascinating figures (see Harry Thompson's superb Peter Cook: A Biography), but his sympathetic eye keenly picks out the fine details of these disparate talents, who paved the way for shows such as Monty Python and Spitting Image. He ends this agreeably nostalgic account by describing how an Internet search engine throws up a hairdressers in Leeds, Alan Bennett's hometown, when he enters the phrase "Beyond the Fringe". Now that's beyond satire. --David Vincent

Atmospheric, entertaining account of the 1960s satire generation that produced Beyond the Fringe, The Establishment Club, Private Eye and That Was the Week that Was, by one of our most distinguished biographers.

1. That Was Satire That Was: The Satire Boom of the 1960s Carpenter, Humphrey

2. That Was Satire That Was: The Satire Boom of the 1960s Carpenter, Humphrey