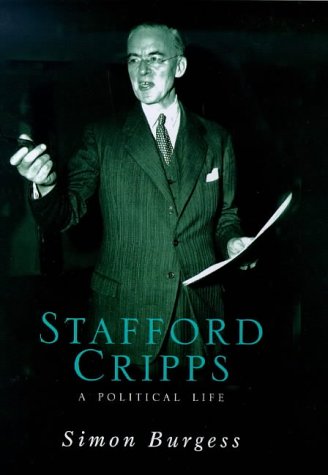 Chancellor of the Exchequer between 1947 and 1950, Sir Stafford Cripps was the most substantial figure in Clement Attlee's ground-breaking 1945-51 government, serving as one of Attlee's 'Big Five' alongside Aneurin Bevan, Ernest Bevin, Hugh Dalton and Herbert Morrison. (All the other four, plus Attlee himself, have been the subject of major biographies). 'Austerity Cripps' became identified with the national mood as the country struggled to make its recovery from the war. Cripps was also a significant minister in Churchill's wartime coalition government and in 1942 came very close to toppling Churchill and becoming Prime Minister himself. This is the definitive biography.

Among the roll-call of famous Labour politicians there are few stranger names than Sir Stafford Cripps (1889-1952). Cripps is best known as Chancellor of Exchequer during the post-war austerity. He is also the man who helped coax Stalin into joining the Allied war effort and tried unsuccessfully to give independence to a united India. The son of a Conservative peer, educated at Winchester, married to an heiress, one of the most successful barristers of his generation (a KC at 37), the owner of homes in the Cotswolds and Hyde Park and a committed Anglican, Cripps was an unlikely convert to socialism. But when it came, his radicalism knew no limits. By the early 1930s he was calling for a working-class seizure of power, the end of the House of Lords (including his own father) and the curtailment of the monarchy's powers. Even his own party expelled him. In this interesting and detailed biography, Simon Burgess carefully pieces together the career of this Labour maverick, explaining the Christian roots of his radicalism, the tireless diplomacy of the war years and his stint as Chancellor, when he remained a patrician to the last, eating vegetarian meals off silverware. --Miles Taylor

Book Description Orion Publishing Group, Limited, 1999. Condition: Good. Ships from the UK. Former Library book. Shows some signs of wear, and may have some markings on the inside. Seller Inventory # 16162358-20

Book Description Gollancz, 1999. Hardback. Condition: Fair. A readable copy of the book which may include some defects such as highlighting and notes. Cover and pages may be creased and show discolouration. Seller Inventory # GOR006314795

Book Description Gollancz, 1999. Hardback. Condition: Very Good. The book has been read, but is in excellent condition. Pages are intact and not marred by notes or highlighting. The spine remains undamaged. Seller Inventory # GOR005496136