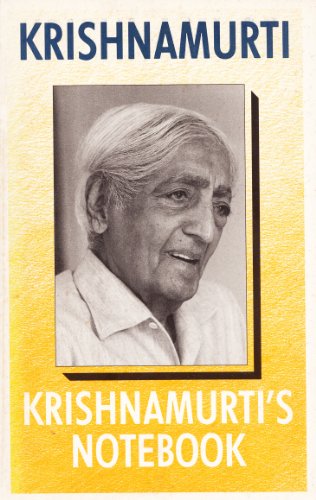 For seven months in 1961 and 1962, Krishnamurti kept a daily record of his perceptions and states of consciousness. It is a kind of diary but one which is little concerned with the day-to-day process of living. At the core of the book, it is claimed, lies the hypothesis of Krishnamurti's teaching.

Krishnamurti, Jiddu born of middle-class Brahmin parents, was recognized at age fourteen as the coming World Teacher. Krishnamurti claimed allegiance to no caste, nationality or religion and was bound by no tradition. He traveled the world and spoke spontaneously to large audiences until the end of his life at age ninety. He said man has to free himself of all fear, conditioning, authority and dogma through self-knowledge and this will bring about order and psychological mutation. For more information see http: //kpublications.com/k_bio.html

Book Description Paperback. Condition: Very Good. The book has been read, but is in excellent condition. Pages are intact and not marred by notes or highlighting. The spine remains undamaged. Seller Inventory # GOR002225018

Book Description Paperback. Condition: Good. The book has been read but remains in clean condition. All pages are intact and the cover is intact. Some minor wear to the spine. Seller Inventory # GOR001971622

Book Description Gollancz, 1985. Condition: Good. A+ Customer service! Satisfaction Guaranteed! Book is in Used-Good condition. Pages and cover are clean and intact. Used items may not include supplementary materials such as CDs or access codes. May show signs of minor shelf wear and contain limited notes and highlighting. Seller Inventory # 0575037636-2-4