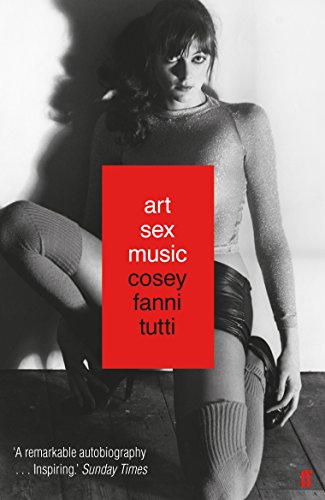 A SUNDAY TIMES, TELEGRAPH, ROUGH TRADE, PITCHFORK AND UNCUT MUSIC BOOK OF THE YEARLONGLISTED FOR THE PENDERYN MUSIC BOOK PRIZEMusician and artist Cosey Fanni Tutti has continually challenged boundaries and conventions for four decades. As a founding member of the hugely influential avant-garde band Throbbing Gristle, as one half of electronic pioneers Chris and Cosey, and as an artist channelling her experience in pornographic modelling and striptease, her work on the margins has come to reshape the mainstream. Shocking, wise and life-affirming, Art Sex Music is the fascinating memoir of an inspirational woman.

Extraordinary . . . Darkly funny [and] consistently fascinating . . . Forever accustomed to life as an outsider, Tutti has never sought approval, but now it's here whether she likes it or not. -- Fiona Sturges, Guardian 'Book of the Day'

I love Cosey Fanni Tutti. Simple as that. -- Nick Cave

Tutti's commitment to individualism precludes any wider political perspective on the industrial culture she helped to instigate, but this fierce adherence to herself . . . has taken her closer to the action than most., Wire

A fearless and frequently eye-popping account of her life., Uncut

Cosey's much-anticipated memoir provides more than even staunch devotees might expect as she recounts her life as a strong woman fighting to make a mark in a male-dominated world . . . In a frequently jaw-dropping rollercoaster tale, Cosey pulls few punches, claiming her relevance to a modern world people take for granted. -- Kris Needs, Record Collector

Fascinating . . . Tutti's clarity and poise help set the record straight on many episodes in the oft tormented life of the band. Yet, it would be wrong to posit the 'Throbbing Gristle connoisseur' as the implied reader of her memoirs. Tutti's recollections, triggered by the discovery of her diaries, touch on so many aspects of her personal life, her solo and collaborative work in the fields of performance, photography, pornography, and music, that they succeed in welcoming the casual reader just as much as the Throbbing Gristle completist. Art Sex Music will captivate anyone with an interest in the evolutions and contradictions of cultural value. -- Giuseppe Zevolli, Drowned in Sound

Punk, pornographer, pioneer, provocateur: the incredible story of Cosey Fanni Tutti, the performer whose art and music inspired a generation and rocked the establishment to its core.