Items related to The Lesser Bohemians 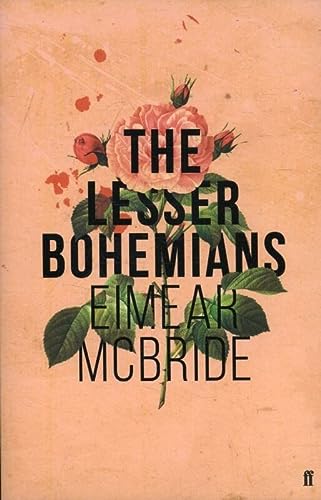 From the writer of one of the most memorable debuts of recent years, a story of first love and redemption. One night in London an eighteen year old girl, recently arrived from Ireland to study drama, meets an older actor and a tumultuous relationship ensues. Set across the bedsits and squats of mid-nineties north London, The Lesser Bohemiansis a story about love and innocence, joy and discovery, the grip of the past and the struggle to be new again.

Magnificently accomplished . . . It is hard to summon up adequate superlatives to describe this fierce, touching, boisterously original and life-enhancing account of what it feels like to be young, to leave home and to fall in love. (Literary Review)

Confirms McBride's status as one of our major novelists . . . the life here radiates through the pages and illuminates ours. (Guardian)

The timeless story of a tumultuous love affair . . . For a second time, Ms. McBride has channelled the mental life of a narrator with an intensity, a lack of mediation, that few authors can achieve. The Lesser Bohemians is a full-on sensory experience - and another superlative achievement. (Wall Street Journal)

After McBride won the Baileys Women's Prize for Fiction for her debut, A Girl is a Half-formed Thing, many wondered if her next novel would sustain that same intensely original, stream-of-consciousness prose style. The Lesser Bohemians, about a young Irish woman, recently arrived in London, who falls for an older man, is softer in tone and subject matter but confirms McBride as an exciting literary talent. (Rebecca Rose Financial Times Book of the Year)

With only her second novel she has achieved the near-impossible - finding a new way to write about sex and intimacy. (Justine Jordan Guardian Books of the Year)

Without ever passing judgment, The Lesser Bohemians situates itself at that point of moral, sexual and grammatical uncertainty where ... 'pure is indivisible from its reverse.' For me it is the ability to delve so deeply into all of this, more or less regardless, that makes for the unique talent- the wilful, sensuous generosity - of Eimear McBride. (LRB)

McBride isn't an old-fashioned despot writer. The take-it-or-leave-it arrogance is absent. The confidence and the capacity are as good as anyone's, male or female, but... there's an openness, an inclusivity, a distinct lack of God-almightyness, that makes reading her such a pleasure. (Jeanette Winterson The New York Times Book Review)

McBride does something rather dazzling ... What is new in Eimear McBride's work is the way she uses a fractured interior language to depict sexual life and sexual trauma, to tell the truth about the body. (TLS)

McBride has a rare gift as a writer: she combines high modernism, page-turning plot and melodrama into a narrative that will appeal to mainstream audiences and fans of literary avant garde . . . The Lesser Bohemians has been 13 years in the making. But great artistic ideas come to those who wait patiently until they are fully developed. (Irish Independent)

Eimear McBride grew up in the west of Ireland and studied acting at Drama Centre London. Her debut novel A Girl is a Half-formed Thing took nine years to publish and subsequently received the Bailey's Women's Prize for Fiction, Kerry Group Irish Novel of the Year, the Goldsmiths Prize, Desmond Elliot Prize and the Geoffrey Faber Memorial Prize, as well as numerous other shortlistings including the Folio Prize and the L.A. Times First Fiction Award. She occasionally writes and reviews for the Guardian, the New Statesman and the TLS.

Book Description Faber & Faber Fiction. Paperback. Condition: Good. Connecting readers with great books since 1972. Used books may not include companion materials, some shelf wear, may contain highlighting/notes, may not include cdrom or access codes. Customer service is our top priority!. Seller Inventory # S_273018172

Book Description Faber & Faber Fiction. Paperback. Condition: Good. Connecting readers with great books since 1972. Used books may not include companion materials, some shelf wear, may contain highlighting/notes, may not include cdrom or access codes. Customer service is our top priority!. Seller Inventory # S_277956627

Book Description Paperback. Condition: Good. The book has been read but remains in clean condition. All pages are intact and the cover is intact. Some minor wear to the spine. Seller Inventory # GOR008244991

Book Description Paperback. Condition: Very Good. The book has been read, but is in excellent condition. Pages are intact and not marred by notes or highlighting. The spine remains undamaged. Seller Inventory # GOR008040945

Book Description Faber & Faber Fiction. Condition: Good. A+ Customer service! Satisfaction Guaranteed! Book is in Used-Good condition. Pages and cover are clean and intact. Used items may not include supplementary materials such as CDs or access codes. May show signs of minor shelf wear and contain limited notes and highlighting. Seller Inventory # 0571327877-2-4