Items related to Red or Dead 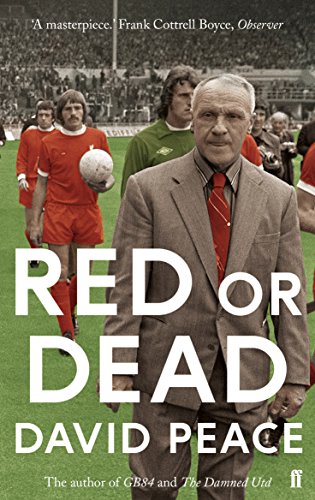 Red Or Dead is a masterpiece. David Peace already has a considerable reputation but this massive, painstaking account of the career of Bill Shankly towers above his previous work. (Frank Cottrell Boyce Observer)

The writing is honed, sculpted, poetic ... Peace has built what is a worthy monument to a figure light years removed from the megabucks and hype of today's football. It doesn't matter if you don't follow the game, this is also a profound investigation of the tension between aspiration and the constraints of time, the very essence of the human condition (Ben Felsenberg Metro)

I want to go out and knock on doors like a Jehovah's Witness and read this book to people. (Peter Hooton Observer)

An epic that has more in common with Beowulf or The Iliad than with the conventional sports novel. (Richard Lloyd Parry The Times)

Both epic in scale and meticulous in its attention to detail. (Dan Davies Esquire)

Peace ... again proves himself to be magnificently single-minded and unbiddable, and has recognised in Shankly another brilliant and pioneering obsessive of his profession. (Mark Lawson The Guardian)

From David Peace - the bestselling author of The Damned Utd - comes Red or Dead, the story of Bill Shankly, the first truly great football manager of the modern age.

Book Description Faber & Faber. Paperback / softback. Condition: New. New copy - Usually dispatched within 4 working days. The players and the supporters.His legacy would reveberate through the ages.In 1974, Liverpool Football Club and Bill Shankly stood on the verge of even greater success. Bill Shankly retired. Red or Dead is the story of the rise of Liverpool Football Club and Bill Shankly. Seller Inventory # B9780571280667