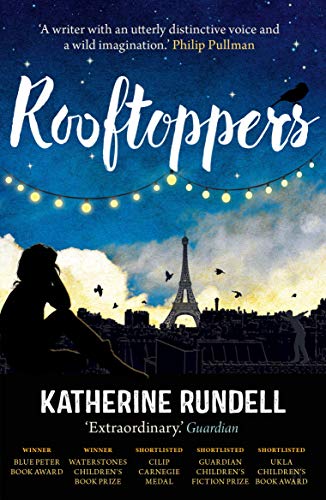 My mother is still alive, and she is going to come for me one day.

Everyone thinks that Sophie is an orphan. True, there were no other recorded female survivors from the shipwreck which left baby Sophie floating in the English Channel in a cello case, but Sophie remembers seeing her mother wave for help. Her guardian tells her it is almost impossible that her mother is still alive, but that means still possible. You should never ignore a possible.

So when the Welfare Agency writes to her guardian threatening to send Sophie to an orphanage, she takes matters into her own hands and flees to Paris to look for her mother, starting with the only clue she has - the address of the cello maker.

Evading the French authorities, she meets Matteo and his network of rooftoppers - urchins who live in the sky. Together they scour the city for Sophie's mother before she is caught and sent back to London, and most importantly before she loses hope.

A writer with an utterly distinctive voice and a wild imagination -- Philip Pullman Published On: 2013-01-18

I enjoyed it tremendously... An ultra stylish writer with a true gift for imaginative storytelling. The next time I go to Paris I will be looking up at the rooftops., Jacqueline Wilson

Rooftoppers takes its cue from the French film Amelie. It's set in a not-quite-real, possibly 19th-century world where winsomeness is the order of the day as an orphaned girl searches for her cellist mother among the rooftops of Paris ... dreamy kids will love it, Daily Telegraph

There is a wistful, old-fashioned charm to Katherine Rundell's second novel: her poetic language and imaginative approach set this book apart from many other adventure stories for this age group. Whimsical, beautifully-written and as carefully balanced as the tightrope Sophie learns to walk, Rooftoppers is a sensitive and emotionally-resonant novel with an uplifting message about the power of hope., Booktrust

Charles Maxim brings Sophie up to write on wallpaper and have the occasional nip of whisky ... Rundell writes with a similar disregard for convention - the childcare officer has a voice "like a window slamming shut" - so your children may dare to live dangerously, but at least they'll steer clear of clichés. -- Dinah Hall, Daily Telegraph

Love and courage turn out to be two words for the same thing. Sophie learns to value and retain the strangeness she was born with and, in holding on to her child's ability to believe in the extraordinary, to "never ignore a possible"., Guardian Published On: 2013-05-18

I think it takes a certain kind of writer who can make the ordinary seem extraordinary with a few sentences and capture your imagination and encourage you, if only for a little while, to see the world in a slightly different way than you'd normally do. And Ms Rundell's definitely that kind of writer ... I really hope other people join Sophie for her adventure because it's truly magical., Wear The Old Coat Blog

Hailed as an instant classic of children's literature, Katherine Rundell's award-winning adventure Rooftoppers takes to the rooftops of Victorian Paris to prove that anything is possible.