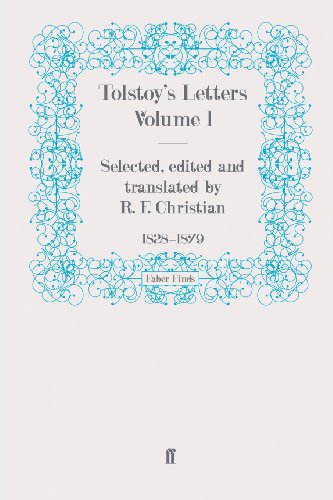 'A Possession for ever.' That is how Sir William Hayley described this two volume edition of Tolstoy's letters when it was first published in 1978. It well merits this accolade.

Leo Tolstoy was unquestionably the most prolific letter-writer of all the great Russian novelists of the nineteenth-century. Over 8500 of his letters have been published. Professor Christian selected and translated 608 of them. As he explains, 'When I began to consider how many letters to translate and on what basis to select them, it soon became apparent that the great majority fell roughly into one of three main categories. First there were those to do with Tolstoy the writer, his views about his own work and the works of other writers. Secondly there were those which concerned Tolstoy the thinker in a broader sense, and expressed his attitude to the times he lived in, contemporary social problems, rural life, industrialisation, education and more especially in later life, religious and spiritual questions. Thirdly there were the letters which were more loosely to do with Tolstoy the man, the main stages of his biography, his relations with his family and friends, and the growth and development of his own personality. '

'both scholarly and easy to read . . . exceptionally rewarding.' Raymond Williams, The Guardian

'This country's leading Tolstoy scholar has selected, edited and translated a twp-volume set of Tolstoy's Letters, which represents academic publishing of the highest kind. The editing and translating are immaculate . . .C.A Johnson, Yorkshire Post

'. . . enthralling and deeply moving . . . They are a true a cross-section as could be desired. In his editing, his brief linking summaries, his always pertinent notes showing an incredible mastery of his subject, he is concerned only to set the scene and introduce the cast . . . Professor Christian's volumes do Tolstoy the immeasurable service of providing self-justification by self-revelation. English Tolstoyans will not be extravagant if they attach to this work Thucydides' epigraph ''A Possession for ever''. Sir William Hayley, The Times

'Nothing remotely comparable to this superb edition of Tolstoy's letters has ever been published before in English.' William B. Edgerton, Indiana University

'the most important Tolstoy publication in English in several decades . . . Together with Professor Christian's helpful and knowledgeable commentary, the letters open up an unequalled panorama of the man, his evolving outlook and the age in which he lived.' Simon Karlinsky, New York Times Review.

Professor R. F. Christian is one of the major scholars of Russian literature of the last one hundred years. Most especially he is associated with Tolstoy being accorded the highest praise from authors and critics like A. N. Wilson, Jay Parini and George Steiner. Among his publications are Tolstoy: A Critical Introduction, Tolstoy's 'War and Peace': A Study and his definitive editions of Tolstoy's Letters and Diaries (both in two volumes). The Letters and Diaries as well as his 'War and Peace' book have been reissued in Faber Finds.

Professor Christian was born in Liverpool, graduated from Oxford University with a first-class honours degree in Russian, joined the Foreign Office and was Attache at the British Embassy in Moscow. His academic career began at the University of Liverpool. At the University of Birmingham he became Chair of Russian Language and Literature. He moved to the University of St. Andrews from where he retired as Head of the Russian Department.

A man of many interests beyond the academic, it has been said of him that 'he has always welcomed change if it led to improvements in standards of teaching and research, but one who has always resisted the idea of change for change's sake.'

Book Description Faber and Faber, 2011. Paperback. Condition: Fair. A readable copy of the book which may include some defects such as highlighting and notes. Cover and pages may be creased and show discolouration. Seller Inventory # GOR011127297

Book Description Faber and Faber, 2011. Paperback. Condition: GOOD. Spine creases, wear to binding and pages from reading. May contain limited notes, underlining or highlighting that does affect the text. Possible ex library copy, will have the markings and stickers associated from the library. Accessories such as CD, codes, toys, may not be included. Seller Inventory # 3342534277