Items related to A Fine Balance 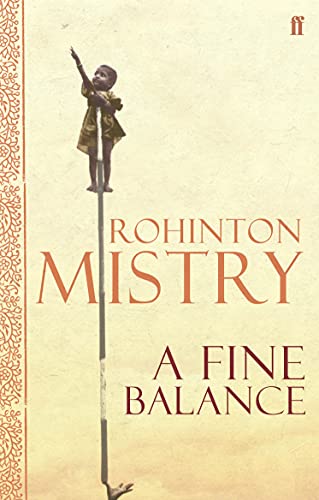 Set in mid-1970s India, A Fine Balance is a subtle and compelling narrative about four unlikely characters who come together in circumstances no one could have foreseen soon after the government declares a 'State of Internal Emergency'. It is a breathtaking achievement: panoramic yet humane, intensely political yet rich with local delight; and, above all, compulsively readable.

In 1975, in an unidentified Indian city, Mrs Dina Dalal, a financially pressed Parsi widow in her early 40s sets up a sweatshop of sorts in her ramshackle apartment. Determined to remain financially independent and to avoid a second marriage, she takes in a boarder and two Hindu tailors to sew dresses for an export company. As the four share their stories, then meals, then living space, human kinship prevails and the four become a kind of family, despite the lines of caste, class and religion. When tragedy strikes, their cherished, newfound stability is threatened, and each character must face a difficult choice in trying to salvage their relationships.

Book Description Paperback. Condition: New. Main. Language: English. Brand new Book. 'A towering masterpiece by a writer of genius.' IndependentIndia, 1975. An unnamed city by the sea. The government has just declared a State of Emergency. Amidst a backdrop of wild political turmoil, the lives of four unlikely strangers collide forever. An epic panorama of modern India in all its corruption, violence, and heroism, A Fine Balance is Rohinton Mistry's prize-winning masterpiece: a Dickensian modern classic brimming with compassion, humour, and insight - and a hymn to the human spirit in an inhuman state.'A masterpiece of illumination and grace. Like all great fiction, it transforms our understanding of life.' Guardian'Magical.' New York Times'Monumental.' Time'Astonishing.' Wall Street JournalWhat readers are saying:'One of the most layered and beautifully executed books I've ever read . Easily one of my all time favourite books!''Many say that the mark of a good book is that it stays with you; well, I read this several years ago and I still find myself thinking of the characters . Beautiful.''What a storyteller, what a wide canvas he covers of India . Wonderful.''One of the best and most entertaining books I have ever read . I can't recommend it highly enough.''Often heartbreaking, always evocative . A book to savour rather than to gallop through.''One of the best books I've read . Not a book for the faint-hearted, but it is a book with a big heart.'. Seller Inventory # AA99780571230587

Something To Tell You - Faber

Book Description Paperback / softback. Condition: New. New copy - Usually dispatched within 4 working days. Set in mid-1970s India, A Fine Balance is a subtle and compelling narrative about four unlikely characters who come together in circumstances no one could have foreseen soon after the government declares a 'State of Internal Emergency'. It is a breathtaking achievement: panoramic yet humane, intensely political yet rich with local delight; Seller Inventory # B9780571230587