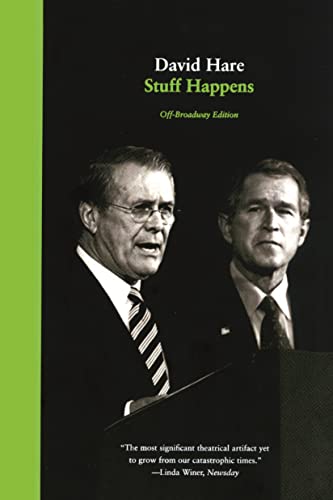 The famous response of Donald Rumsfeld, American Secretary of Defense, to the looting of Baghdad, at a press conference on 11 April 2003, provides the title for a new play, specially written for the Olivier Theatre, about the extraordinary process leading up to the invasion of Iraq.

How does the world settle its differences, now there is only one superpower? What happens to leaders risking their credibility with sceptical publics? From events which have dominated international headlines for the last two years David Hare has fashioned both a historical narrative and a human drama about the frustrations of power and the limits of diplomacy.

'When future historians come to study the state of Britain in the late twentieth century, Hare will be the playwright they turn to first.' Blake Morrison, Independent on Sunday

"His best political play yet . . . An exhilarating account of the genesis of the current war in Iraq." --John Lahr, The New Yorker "The most significant theatrical artifact yet to grow from our catastrophic times." --Linda Winer, Newsday "The most feverishly anticipated play in London in recent memory." --Ben Brantley, The New York Times

Stuff Happens by renowned playwright David Hare manages to mix a historical narrative - concerning the events leading up to the invasion of Iraq - with a human drama about the frustrations of power and the limits of diplomacy.