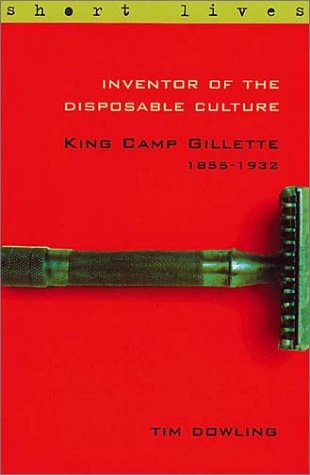 King Camp Gillette's safety razor - eight years in the making - revolutionised a dangerous chore, and made its creator a very rich man. In this incisive biography, Tim Dowling examines the contradictions at the heart of the razor king, a socialist utopian who fulminated against the evils of capitalism while at the same time zealously embracing his role as father of the disposable economy.

Utopians have often proved the greatest inventors. One thinks of Jeremy Bentham and his Panopticon prison, Robert Owen and his factory villages. In "Inventor of the Disposable Culture: King Camp Gillette" Tim Dowling adds another to the list: Gillette, the American inventor of the disposable razor blade, who turns out to have been a socialist visionary. For those who know the story already there is not a lot new here, for those who don't it is a well-written and pacey introduction. --Miles Taylor

Born in Connecticut, Tim Dowling moved to London in 1992. He writes for the Guardian and The Times, and is currently working on a book on fatherhood.