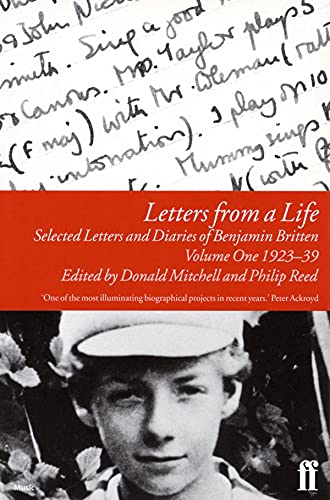 Volume One of these remarkable letters and diaries opens with a letter from Britten aged nine to his formidable mother, Edith. Music is already at the centre of his life, and it accompanies him through prep and public school and then to London to the Royal College of Music, where the phenomenally gifted but inexperienced young composer is plunged into metropolitan life and makes influential new friends, among them W. H. Auden and Christopher Isherwood. This was a time of prodigious musical creativity, a growing awareness of his sexuality, and the dawning of his political convictions. Most importantly, during this period Britten met Peter Pears and established the musical and personal relationship that was to last a lifetime. Volume One comes to a close in May 1939, when Britten, accompanied by Pears, departs for North America.

The letters and diaries in this illuminating first volume and its successor are supplemented by the editors' detailed commentary and by exhaustive contemporary documentation. Together they constitute a comprehensive portrait not only of the composer but of an age.

Letters from a Life Vol 1: 1923-39: Selected Letters and Diaries of Benjamin Britten covers the period of the enormously important composer's life in which he makes the acquaintance of W. H. Auden and Christopher Isherwood as well as, crucially, Peter Pears, with whom he would form a lifelong musical and personal relationship.

Benjamin Britten (1913 - 76) began composing at the age of six, and his first compositions were published while he was still a student. He made a living through writing music for documentary films in the 1930s, beginning a collaboration with W H Auden which continued when he and his life-long partner, the singer Peter Pears, moved to the USA in 1939. Returning in 1942 he began work on his operatic masterpiece, Peter Grimes, the first of the many operas that dominated his career.His greatest public success came with the War Requiem in 1962; he died four years after the completion of his final opera, Death in Venice.