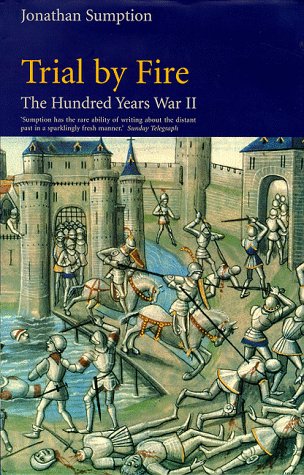 This second volume on the Hundred Years War traces Edward III's increasing domination of France, from the fall of Calais in 1347 up to 1369. The period is dominated by a succession of crises in French affairs of state; crises that brought it to the verge of ruin. The catastrophic defeat at Poitiers - at the hands of England's Black Prince - followed by the capture of the King, revolutions in Paris and the countryside, and a humiliating treaty of partition, all contributed to bring a rich and powerful nation to its knees.

It's almost as if the nine years that have passed since the publication ofTrial by Battle, the first volume of Jonathan Sumption's ongoing history of the Hundred Years War, never happened, so seamlessly does Trial By Firecontinue the narrative.

Trial by Fire documents the continuing relentless domination of France by Edward III from the fall of Calais in 1347 to his decision in 1369 to add the French coat of arms to those of England on his seals in celebration of his apparent triumph. Along the way we see the French reduced to a squabbling rabble after the Battle of Poitiers in 1356 which resulted in revolutions in Paris and the countryside. Sumption is too shrewd an observer to tell such a one-sided history and he is at pains to point out that however impressive the English victories may have seemed, the scale of them was largely illusory and short-lived.

Whatever the perception of the Hundred Years War as an epic conflict between two nation states, the reality was far more complicated. Both the English and the French camps were made up of a series of uneasy and shifting alliances. So who actually won never became clear--at least not until long after the swords had been sheathed. For instance, after King John II had been captured at Poitiers, the French were forced into a humiliating treaty which handed over much of France to King Edward. But John conveniently, or inconveniently, depending which way you look at it, died shortly after and his successor Charles V decided there were good reasons to no longer recognise the agreement. Seen like this, Edward's decision to add the French coat of arms to the English looks more like an empty gesture than an expression of all-conquering might.

As with the first volume, Sumption writes with engaging simplicity, making sense of the apparently pointless and bringing together a cast of thousands into a homogenous digestible whole. -- John Crace

The second volume of Jonathan Sumption's monumental history of the Hundred Years War. "This will become the standard account of the War."--"Choice"

"A classic of sharp scholarship and dust-dispelling energy. . . . Throughout his vigorous narrative, Sumption displays an effortless command of sources."--"Times Literary Supplement"

"Sumption is bringing together so many different stories from so many countries and telling them with such close attention to detail that the chronicles of confusion become a trustworthy record of the time."--"New York Review of Books"

"Like the great fourteenth-century chronicler Jean Froissart, to whom [Sumtion] is a worthy successor, the value of his work lies at least in part in the fact that he includes so much that others leave out. There is no other book which tells the story of this phase of the war so graphically, "the savagery, the utter savagery," to say nothing of the sheer pointlessness, of it all. "Divided Houses" is a compelling, sustained exercise in original research: all in all, a remarkable achievement."--"Times Literary Supplement"

Praise for "The Hundred Years War, Volume I: Trial by Battle"--

"A rich book, filled with detail and incident, yet never losing a sense of the overall sweep of events."--"Times Literary Supplement"

"Without any doubt, this book immediately takes its place as the best available account of this phase of the war. . . . It is compulsively readable, in part the consequence of a lucid style and apt choice of detail, but mainly the result of a masterly overall grasp, acute judgement, fresh insight, and a compelling sense of immediacy that fully justifies the author's preference for a predominantly narrative approach. Throughout, there is a sense of a luminous intelligence working on the material."--"History"

"This will become the standard account of the War."--"Choice"

"In a balanced and seamless presentation, the origins and first decade of the Hundred Years' War unfold before the reader."--"American Historical Review"