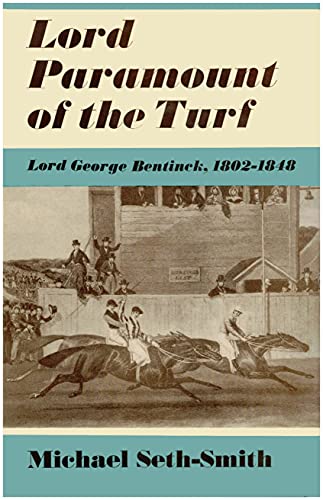 Book Description Hardback. Condition: Very Good. The book has been read, but is in excellent condition. Pages are intact and not marred by notes or highlighting. The spine remains undamaged. Seller Inventory # GOR004796940

Book Description Hardback. Condition: Fair. A readable copy of the book which may include some defects such as highlighting and notes. Cover and pages may be creased and show discolouration. Seller Inventory # GOR005781651

Book Description Condition: Good. Ships from the UK. Former library book; may include library markings. Used book that is in clean, average condition without any missing pages. Seller Inventory # GRP74197684

Book Description Hardback. Condition: Fine. Dust Jacket Condition: Fine. First Edition. LORD PARAMOUNT OF THE TURF. Lord George Bentinck 1802-1848 Michael Seth-Smith. Faber & Faber Ltd, London 1971 First Edition ISBN 0571092047 170pp Illustrated Hardback. This copy is in FINE unmarked condition in a FINE price clipped dustwrapper. Laid in is a cutting from The Times of an article by lord Oaksey on Lord George Bentinck and Goodwood dated 30/July 1991. Lord (William) George Frederick Cavendish-Scott-Bentinck (27 February 1802 ? 21 September 1848), better known as simply Lord George Bentinck, was an English Conservative politician and racehorse owner, best known (with Benjamin Disraeli) for his role in unseating Sir Robert Peel over the Corn Laws. Bentinck was a younger son of the 4th Duke of Portland, and elected a Member of Parliament (MP) for King's Lynn in 1828, which constituency he represented, in succession to his uncle, William Henry Cavendish-Bentinck, until his death. Although initially a follower of George Canning, Bentinck supported the Whigs over the question of parliamentary reform. However, in 1834 he broke with the Whigs and, like Lord Stanley and Sir James Graham, among others, joined the new Conservative Party (via the short lived political centre grouping known as the 'Derby Dilly ') which formed under the leadership of Peel. Bentinck resigned the leadership in 1848, his support of Jewish emancipation being unpopular with the bulk of the party, and was succeeded by the Marquess of Granby. He died of a heart attack in September of that year. There have been rumours, first appearing in the memoirs of the politician and journalist Louis John Jennings, that it was not a heart attack. Bentinck's interest in horse racing may have led to his betting against Dr. William Palmer of Rugeley, and Jennings suggested that Palmer poisoned Bentinck. Most historians dismiss this story as false. Clerk to the Privy Council Charles Greville wrote after Bentinck's death: "He brought into politics the same ardour, activity, industry and cleverness which he had displayed on the turf . . . having once espoused a cause and espoused a party, from whatever motive, he worked with all the force of his intellect and a superhuman power of application in what he perceived to be the interest of that party and that cause . . . [However] I have not the least doubt that, for his own reputation and celebrity, he died at the most opportune period; his fame had probably reached its zenith, and credit was given him for greater abilities than he possessed." In addition to his political activities, Bentinck was well known for his interest in "the Turf." Bentinck owned several successful race horses and his stable was renowned for its quality. Bentinck was particularly admired in many quarters for his efforts to eliminate fraud in the sport. He became devoted to the affairs of the turf and as senior steward of the Jockey Club, his mission was to rid the sport of all dodgy dealings, tighten up the weighing in and out rules, plus ensure that the horses were the correct age for their class. In reshaping the whole pattern of racing, Lord George acquired the sobriquet ?Lord Paramount of the Turf?. He also initiated a more powerful Jockey Club, which insisted that the management of the racecourses contribute to the stakes. This, together with the introduction of a pre-race parade and public saddling, initially only at Goodwood and Epsom, gave an enormous boost to on-course betting. Ref V6. Seller Inventory # 006285