Items related to Religious Diversity in Ancient Israel and Judah 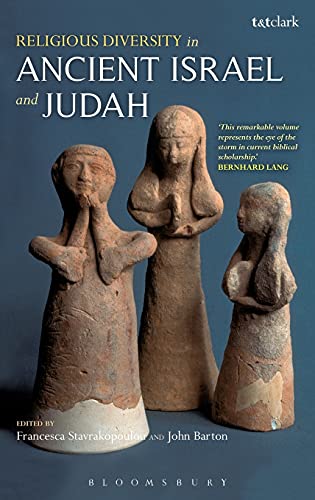 Understanding of the religious beliefs and practices of the ancient Israelites has changed considerably in recent years. It is now increasingly accepted that the biblical presentation of Israelite religion is often at odds with the historical realities of ancient Israel's religious climate. As such, the diversity inherentÂ to ancient Israelite religion is often overlooked-particularly within university lecture halls and classrooms.Â ThisÂ textbook draws together specialists in the field to explain, illustrate and analyze this religious diversity. Following an introductory essay guiding the reader through the book, the collection falls into three sections.

The first focuses on conceptual diversities. It deconstructs common assumptions about Israelite religion and reconstructs Israelite perceptions of the nature of the religious world. The second section examines socio-religious diversities. It studies the varied social contexts of ancient Israelites, exploring the relationship between worshippers' social locations and their perceptions and experiences of the divine. The third section deals with geographical diversities. It seeks to understand how geographical distinctions engender certain characteristics within Israelite religion and impact upon religious perceptions.

Underpinning each essay in this volume is a shared concern to: (1) explore the ways in which worshippers' socio-cultural contexts shape and colour their religious beliefs and practices; (2) assess the role, benefits and limitations of the Hebrew Bible/Old Testament in reconstructing ancient Israelite religion.

The past generation of scholars saw the shift from unified notions of biblical theology to diverse developmental models based on the rise of monotheism towards the end of the biblical period. Now another, perhaps more relevant, shift is becoming apparent: a movement from ideas of unity to those of pluralism and diversity within the religion practiced by ancient Israelites and Judahites. Edited by two prominent scholars, this book brings together all the existing scholarly perspectives on such diversity, and adds some new ones. This remarkable volume represents the eye of the storm in current biblical scholarship.
The Good Book Stall, September 2010

Books about "the religion of ancient Israel" are not always clear as to whether their subject matter is what people in those times and places were actually doing and thinking (a further degree of difficulty) in the religious sphere of their lives, or rather what certain religious elites - priests, prophets, law scribes - thought they ought to be doing and thinking. As its title suggests, the present volume is quite clear on that point. Its contributors present a wide range of religious practices diversified geographically (north, south), topographically (household, village, city, temple, royal court), and sociologically (peasant culture, professional groups, cultic personnel), in the process illuminating many fascinating by-ways of scholarship. The editors and contributors are to be congratulated on putting together a composite image of religion in practice under the rubric of religious diversity. This is a book not to be missed.

It has long been a commonplace to assume development within the religion of ancient Israel -- as is evidenced by the many chronologically-based histories of Israelite religion that were produced during the late nineteenth century and throughout the twentieth century. Development, moreover, could be taken to imply diversity, through the defining of differences between Israelite religious thought of the monarchical period, say, and of the postexilic era. But the authors of Religious Diversity in Ancient Israel and Judah bring a far more sophisticated and far more exciting paradigm of difference to bear in their work, both by moving beyond scholars' traditional focus on developments in the religious thought of Israel's theological elites in order to concentrate instead on Israelite religion as it was actually lived and practiced among the population at large, and also by taking seriously differences in the ancient Israelites' religious life and practice that were manifest concurrently during any given time within ancient Israelite history - due, say, to differences in geographical location or due to differences in social context within the same geographical region (so that, for example, Israelite religion as it was practiced in urban venues is contrasted profitably to the religious expressions that characterized rural settlements, and religion as it was practiced in the Judahite royal palace is equally profitably contrasted to the religion of the commoner's household). The result is a richly textured description of Israel's "micro-religions" that represents, moreover, the state of the art, as older narratives of theological evolution are left behind in favor of a multivalent and carefully nuanced account of the manifold variations that characterized Israelite and Judahite religious life at every moment during these two polities' existence.

Francesca Stavrakopoulou is Senior Lecturer in Hebrew Bible at the University of Exeter, UK. Her research focuses on ancient Israelite religion, Judahite kingship, and history and ideology in the Hebrew Bible. She is the author of King Manasseh and Child Sacrifice: Biblical Distortions of Historical Realities (De Gruyter, 2004).