Items related to A History of British Art

A History of British Art 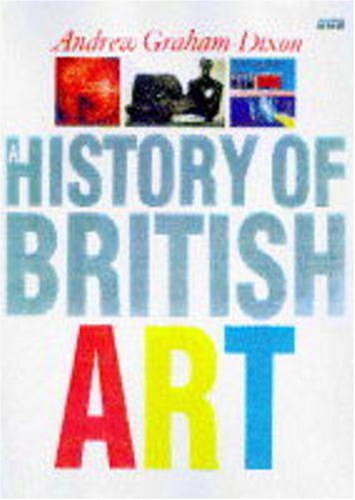 Although its painters and sculptors have mostly been overshadowed by their contemporaries in mainland Europe, Britain has produced many outstanding artists, who are often overlooked in European studies. This phenomenon is examined in this study of British art from the Reformation to the present. The book is linked to a BBC2 television series. As he considers the works of artists as disparate as Stubbs and Bacon, Hogarth and Hockney, Constable and Henry Moore, the author depicts the cultural life of Britain since the Middle Ages which embraces not only painting and sculpture but also history, politics, architecture and literature.

Andrew Graham-Dixon's A History of British Art begins with the unpromising acknowledgment that "the British are a tribe of writers, not painters ... we have never been truly possessed of a native visual imagination." Graham-Dixon's book is an attempt to challenge these assumptions about British art and its history and he does so through a striking reassessment of the "tradition of anti-art, which dominated Britain for more than a century after the start of the Reformation". In tracing "the nation's love-hate relationship with art" and the recurrent "iconophobia" which has often literally done such damage to British art, Graham-Dixon offers a refreshing perspective on a surprisingly neglected topic.

Beginning with a consideration of what remains of a Catholic, pre-Reformation tradition in 15th-century English architecture and church art, Graham-Dixon reassesses the bad press accorded the Tudors. He offers illuminating accounts of the paradoxical embrace of Holbein and VanDyck by the English court, Holbein in particular exemplifying English values of "common sense, precision, empiricism, determination, a capacity for inward reflection and a strong consciousness of responsibility." Gainsborough and Reynolds are reluctantly classified as self-consciously derivative geniuses caught in the shadow of the past, whilst George Stubbs is given the rather surprising accolade that "a painting by him can hang next to a great Titian or Rembrandt." However, despite its occasionally grandiloquent claims, there are fine sections on the radical nature of Constable and Turner, the turn away from their innovations by the Victorians and the complex, often painful reception of modernism into the mainstream of 20th-century British art from Wyndham Lewis to Damien Hirst. Overall, this is an elegant and readable overview of British art. --Jerry Brotton

"Brilliant . . . The line between education and entertainment was not so much blurred as obliterated."--Roy Hattersley, "Daily Express