Items related to A Matter Of Opinion

Hansen, Alan A Matter Of Opinion

A Matter Of Opinion 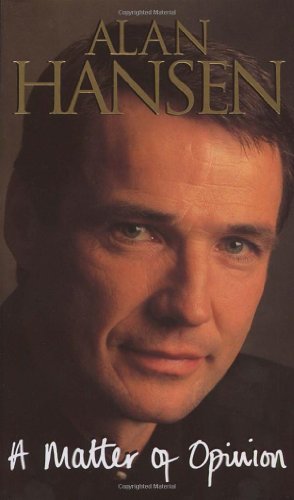 As Alan Hansen knows only too well, football is a game of opinions. During his career as a player he faced intense criticism from the media which undermined his confidence and often threatened to overwhelm him. In this work, Hansen looks back on the triumphs and tragedies that marked his career.

"'This book is a great read. Not only does Hansen give an insight into the Liverpool side which won eight championships, but in print he combines his trademark bluntness with a degree of tact few of us ever suspected he could achieve' Glasgow Sunday Herald" (Glasgow Herald)

"'This new autobiography from the celebrated Match of the Day pundit covers far more ground than his previous attempt...He offers his uncompromising views on the game today as well as his playing days . . . All in all it is an enjoyable and frank account of a glorious career' Independent (Read of the Week)"

"'Alan Hansen claims this is an autobiography, but it is much more than that. True, the BBC pundit and Express columnist has more than enough tales to tell from fourteen seasons at Liverpool. But A Matter of Opinion is precisely that. Hansen shares his thoughts on a variety of aspects of the game but the spotlight is never more illuminating than when cast upon himself . . . Now, nine years after hanging up his boots, the analytical style that takes a back seat often enough to allow the dry humour to come through, makes this one of the more readable football books . . . The thoughts of Hansen are a hit.' Express on Sunday" (Sunday Express)

The autobiography of one of football’s most outspoken and popular media pundits.

1. A MATTER OF OPINION

2. A Matter of Opinion Hansen, Alan