Items related to Rise of Endymion: 4 (A Bantam Spectre book) 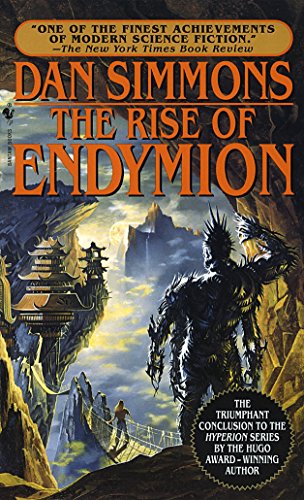 In "The Rise of Endymion, " Dan Simmons brings to a triumphant conclusion one of the most celebrated, compelling, and dramatic science fiction sagas of our time. Brilliant, provocative, unfailingly inventive, the odyssey began with the Hugo Award{winning "Hyperion, " continued through the critically acclaimed "The Fall of Hyperion" and "Endymion, " and now ascends to its greatest heights yet....
The final chapter of this magnificent saga begins with two momentous events: the death and resurrection of Pope Julius XV and the coming-of-age of the new messiah. Her name is Aenea and she is the only person who can counter the pope and his plan to unleash the Pax Fleet, the Church's military wing, on a final genocidal Crusade to gain total dominion over the universe. The Church is allied with the infamous AI Core, which has offered immortality to humankind--or at least to those faithful who pledge total obedience to the Church--but at what terrible price? The Core has its own dark motives and secrets, and only Aenea knows what they are.
Aenea, too, has an ally. Her protector, Raul Endymion, onetime shepherd and convicted murderer, finds her in exile undergoing a strange apprenticeship on Old Earth. Here she has gained access to an information matrix created by the Others--the same mysterious Others who moved Old Earth to save it from the Core. But who are these Others? What has Aenea learned from them? And why has Old Earth been turned into a stage upon which cybrids from the past--from John Keats to Frank Lloyd Wright--repeat historical dramas of human genius for purposes known only to the Others?
The answers to these questions must wait. Together with the android A. Bettik,Endymion and his beloved Aenea embark on a final mission to find and comprehend the underlying fabric of the universe. The surprising nature of this medium and Aenea's ability to instruct her growing army of disciples in its discovery and use could provide the one weapon powerful enough to thwart their enemies while liberating humanity. Meanwhile, the enigmatic Shrike--monster, angel, killing machine--has followed them on their intergalactic sojourn and now stands ready to complete its own mission, revealing at last the long-held secret of its origin and purpose.
In "The Rise of Endymion, " Dan Simmons masterfully weaves together the complex strands of this extraordinary series. He answers all of the unsolved mysteries posed in the earlier volumes and brings the story full circle to the planet Hyperion, where it all began. A work of unparalleled power and vision, "The Rise of Endymion" is a masterpiece of the imagination by one of our most gifted writers.

Praise for Dan Simmons and the "Hyperion" novels:
"The Rise of Endymion: "
"Simmons' scope is truly staggering, his inventiveness continues to impress, and the narrative offers something for everyone."
"--Kirkus Reviews"
"Hyperion: "
"The "Hyperion" saga is an astonishing achievement, overbrimming with adventure, lyricism and insight. A miracle of invention and economy, played out on a dozen and more meticulously created worlds, the tetralogy is surely one of science fiction's grandest visions."
"--BookPage"
"Extraordinary."
"--Asimov's Science Fiction"
"A magnificently original blend of themes and styles."
"--The Denver Post"
"The Fall of Hyperion: "
"Generously conceivedand stylistically sure-handed...an unfailingly inventive narrative that bears comparison with such classics as Isaac Asimov's "Foundation" series, Frank Herbert's "Dune, " and Gene Wolfe's "Book of the New Sun." "
"--The New York Times Book Review"
"Dan Simmons has brilliantly conceptualized a future 700 years distant. In sheer scope and complexity it matches, and perhaps even surpasses, those of Isaac Asimov and James Blish."
"--The Washington Post Book World"
"Endymion: "
"[A] mastery of far-future science fiction."
"--The New York Times Book Review"
"Best science fiction novel of 1995."
"--Rocky Mountain News"

"One of the finest achievements of modern science fiction."
--The New York Times Book Review

"The Rise Of Endymion, like its predecessors, is a full-blooded action novel...distinguished from formulaic space opera by the magnitude of what is at stake--which is nothing less than the salvation of the human soul."
--The New York Times Book Review "A novel rich with power and passion, and an enormously satisfying conclusion to one of the major works of modern science fiction."
--Locus Book Description:

The conclusion to the groundbreaking Hyperion Cantos

1. The Rise of Endymion (Hyperion)

2. The Rise of Endymion (Hyperion)

3. The Rise of Endymion (Hyperion)

4. The Rise of Endymion (Hyperion)

5. The Rise of Endymion (Paperback or Softback)

6. The Rise of Endymion (Hyperion)

7. The Rise of Endymion (Hyperion)

8. The Rise of Endymion (Hyperion)

9. The Rise of Endymion (Hyperion)

10. The Rise of Endymion (Hyperion)