Items related to Indiana Jones and the Secret of the Sphinx

Max McCoy Indiana Jones and the Secret of the Sphinx

Indiana Jones and the Secret of the Sphinx 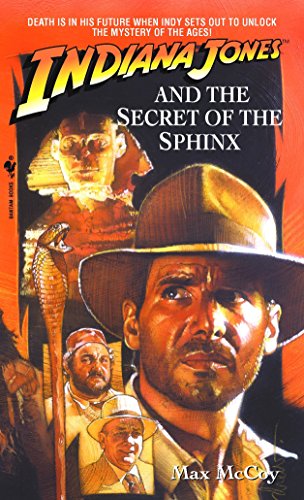 It is the most coveted of all ancient artifacts. In it is written the history--and the fate--of every human being. And he who owns it writes his own destiny. Now Indiana Jones follows a trail of danger, magic, and archaeological mystery through the war-torn Orient, from Rangoon to the Egyptian desert, searching for the secret underground hiding place of the all-powerful Omega Book. But with a beautiful woman seeking her missing magician husband, and a vengeance-crazed Japanese spymaster hot on his heels, Indy is running out of time. If the Omega Book falls into the wrong hands, not only his own fate but the fate of the world will be at the mercy of a madman bent on writing humanity's final chapter!

With a woman searching for her magician husband and a diabolical Japanese spymaster hot on his trail, Indiana Jones embarks on an adventure of peril, magic, and mystery through the war-ravaged Orient to find the Omega Book--an ancient artifact that can change the fate of the world. Original.

Max McCoy is an award-winning journalist and author whose novels include The Sixth Rider and Sons of Fire. He lives in Pittsburgh, Kansas.

1. Indiana Jones and the Secret of the Sphinx

2. INDIANA JONES AND THE SECRET OF

3. INDIANA JONES AND THE SECRET OF