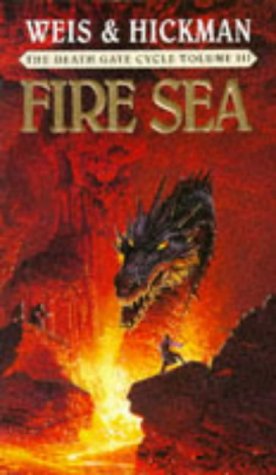 Long ago, powerful wizards sundered a world into four realms - sky, stone, fire, and sea - and then vanished. Their descendants in the magic arts were confined to their own realms and over time gradually forgot the others. Now the presence of the four separate realms is known only to those few who have survived the horrors of the labyrinth and traversed the central Death Gate, pathway to all of their severed worlds. In Fire Sea, Haplo the Patryn, who has been commanded to journey to each four worlds through the strangely transforming Death Gate, rides a tide of fiery magma into Abarrach, Realm of Stone. Haplo shares his rune-guarded vessel with the Sartan named Alfred, who until now was thought to be the last living member of this race. Until now - for soon after discovering the deserted, bloodied city of Safe Harbor. Haplo and Alfred - by nature enemies and by necessity comrades- come face to face with the lost tribe of Sartan practicing their most forbidden magic. Marshalled by the Sartan's most powerful magicians, armies are moving in the night as Abarrach is swept up in civil war. The realm's rulers search desperately for the Death Gate and anyone who has knowledge of it. For the princes and sorcerers of Abarrach are driven by the horrifying knowledge that doom is gradually overcoming their world of catacombs and lava, a doom spelled out in a mystical, inscrutable prophecy that foretells very different fates for the living ...and the dead. This remarkable series of seven novels - each a complete stand-alone work - is a triumph of epic fantasy. Their first four volumes explore the four different realms of a splintered universe peopled by vivid characters who struggle to find order in the destruction and isolation that has befallen them. In the final three volumes the war for redemption begins, as magicians, wanderers, fighters and friends join in a cataclysmic battle for reunification of one common universe. Intensely imaginative, thoroughly captivating. Fire Sea is the third volume of the introductory cycle and a magnificent tale in its own right.

The third of a seven-volume fantasy series. Haplo the Patryn, commanded to journey to each of the four worlds through the Death Gate, rides a tide of fiery magma into Abarrach, Realm of Stone. Haplo shares his runeguarded vessel with the Sartan named Alfred, presumed to be the last of his race.

MARGARET WEIS and TRACY HICKMAN are the New York Times bestselling authors of the Dragonlance series, The Darksword Trilogy and the Rose of the Prophet trilogy. With The Death Gate Cycle, this important creative team takes a quantum leap forward in the field of epic fantasy.