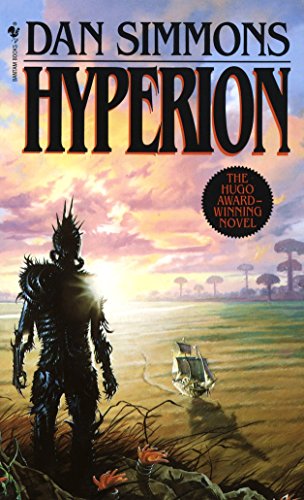 On the world called Hyperion, beyond the law of the Hegemony of Man, therewaits the creature called the Shrike. There are those who worship it. Thereare those who fear it. And there are those who have vowed to destroy it. Inthe Valley of the Time Tombs, where huge, brooding structures move backwardthrough time, the Shrike waits for them all. On the eve of Armageddon, withthe entire galaxy at war, seven pilgrims set forth on a final voyage toHyperion seeking the answers to the unsolved riddles of their lives. Eachcarries a desperate hope--and a terrible secret. And one may hold the fate ofhumanity in his hands.

Hyperion is the first of a much-heralded two-part work -- including the The Fall of Hyperion--about the last days of a vibrant yet self-destructive galactic civilization of humans called the Hegemony. The Hegemony is doomed because in exchange for the knowledge needed to conquer the stars, the human species sold its soul to a hive of machine-based intelligence known as Technocore. Six people embark on a pilgrimage to Hyperion, their only hope for redemption, to seek the help of the Shrike, a half- mechanical, half-organic creature that inspires both terror and devotion in its subjects. The book won the 1990 Hugo Award for Science Fiction.

Praise for Dan Simmons and Hyperion