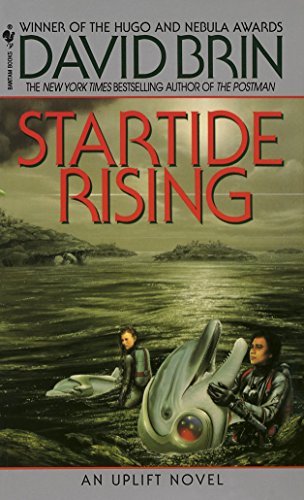 David Brin's Uplift novels are among the most thrilling and extraordinary science fiction ever written. Sundiver, Startide Rising, and The Uplift War--a New York Times bestseller--together make up one of the most beloved sagas of all time. Brin's tales are set in a future universe in which no species can reach sentience without being "uplifted" by a patron race. But the greatest mystery of all remains unsolved: who uplifted humankind?

The Terran exploration vessel Streaker has crashed in the uncharted water world of Kithrup, bearing one of the most important discoveries in galactic history. Below, a handful of her human and dolphin crew battles armed rebellion and a hostile planet to safeguard her secret--the fate of the Progenitors, the fabled First Race who seeded wisdom throughout the stars.

"The Uplift books are as compulsive reading as anything ever published in the genre."
--The Encyclopedia of Science Fiction

David Brin is the author of Sundiver, The Uplift War, Startide Rising, The Practice Effect, The Postman, Heart of the Comet (with Gregory Benford), Earth, Glory Season, Brightness Reef, and Infinity's Shore, as well as the short-story collections The River of Time and Otherness. He has a doctorate in astrophysics and has been a NASA consultant and a physics professor. He lives in southern California.