Items related to Metamorphosis and Other Stories (Bantam Classics)

Metamorphosis and Other Stories (Bantam Classics) 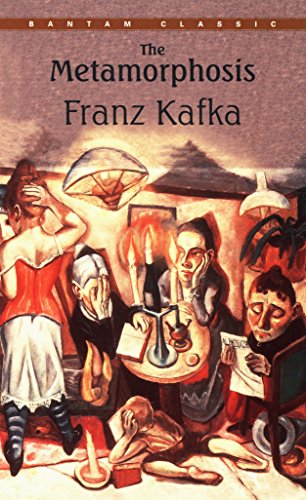 "Kafka's survey of the insectile situation of young Jews in inner Bohemia can hardly be improved upon: 'With their posterior legs they were still glued to their father's Jewishness and with their wavering anterior legs they found no new ground.' There is a sense in which Kafka's Jewish question ('What have I in common with Jews?') has become everybody's question, Jewish alienation the template for all our doubts. What is Muslimness? What is femaleness? What is Polishness? These days we all find our anterior legs flailing before us. We're all insects, all Ungeziefer, now."
--Zadie Smith

"Kafka engaged in no technical experiments whatsoever; without in any way changing the German language, he stripped it of its involved constructions until it became clear and simple, like everyday speech purified of slang and negligence. The common experience of Kafka's readers is one of general and vague fascination, even in stories they fail to understand, a precise recollection of strange and seemingly absurd images and descriptions--until one day the hidden meaning reveals itself to them with the sudden evidence of a truth simple and incontestable."
--Hannah Arendt About the Author:

Franz Kafka was born in 1833 to a well-to-do middle-class Jewish family. His father, the self-made proprietor of a wholesale haberdashery business, was a domineering man whose approbation Franz continually struggled to win. The younger Kafka's feelings of inadequacy and guilt form the background of much of his work and are made explicit in his "Letter to His Father" (excerpted in this volume), which was written in 1919 but never sent. Kafka was educated in the German language schools of Prague and at the city's German University, where in 1908 he took a law degree. Literature, however, remained his sole passion. At this time he became part of a literary circle that included Franz Werfel, Martin Buber, and Kafka's close friend Max Brod. Encouraged by Brod, Kafka published the prose collection Observations in 1913. Two years later his story "The Stoker" won the Fontaine prize. In 1916 he began work on The Trial and between this time and 1923 produced three incomplete novels as well as numerous sketches and stories. In his lifetime some of his short works did appear: The Judgment (1916), The Metamorphosis (1916), The Penal Colony (1919), and The Country Doctor (1919). Before his death of tuberculosis in 1924, Kafka had charged Max Brod with the execution of his estate, ordering Brod to burn the manuscripts. With the somewhat circular justification that Kafka must have known his friend could not obey such an order, Brod decided to publish Kafka's writings. To this act of "betrayal" the world owes the preservation of some of the most unforgettable and influential literary works of our century.

1. Metamorphosis and Other Stories (Paperback)

Book Description Bantam Doubleday Dell Publishing Group Inc, United States, 1989. Paperback. Condition: New. Reprint. Language: English. Brand new Book. "When Gregor Samsa woke up one morning from unsettling dreams, he found himself changed in his bed into a monstrous vermin." With this startling, bizarre, yet surprisingly funny first sentence, Kafka begins his masterpiece, The Metamorphosis. It is the story of a young man who, transformed overnight into a giant beetlelike insect, becomes an object of disgrace to his family, an outsider in his own home, a quintessentially alienated man. A harrowing--though absurdly comic--meditation on human feelings of inadequacy, guilt, and isolation, The Metamorphosis has taken its place as one of the most widely read and influential works of twentieth-century fiction. As W.H. Auden wrote, "Kafka is important to us because his predicament is the predicament of modern man.". Seller Inventory # AA99780553213690

5. The Metamorphosis (Paperback or Softback)

Book Description Mass Market Paperback. Condition: New. Mass Market Paperback. "When Gregor Samsa woke up one morning from unsettling dreams, he found himself changed in his bed into a monstrous vermin." With this startling, bizarre, yet surpris.Shipping may be from multiple locations in the US or from the UK, depending on stock availability. 224 pages. 0.170. Seller Inventory # 9780553213690