Items related to Almost Like A Whale: The Origin Of Species Updated

Jones, Steve Almost Like A Whale: The Origin Of Species Updated 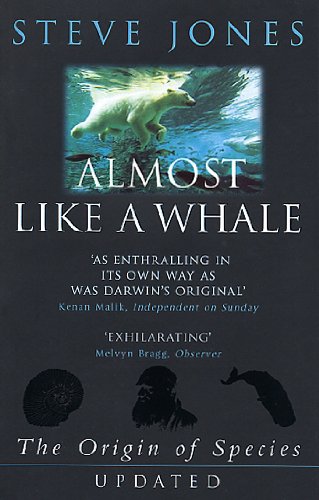 In his new book, Steve Jones takes on the challenge of going back to the book of the millennium, Charles Darwin's The Origin of Species. Before The Origin, biology was a set of unconnected facts. Darwin made it into a science, linked by the theory of evolution, the grammar of the living world.It reveals ties between cancer and the genetics of fish, between brewing and inherited disease, between the sex lives of crocodiles and the politics of Brazil. Darwin used the biology of the nineteenth century to prove his case. Now, that science has been revolutionized and his case can be reargued using the twentieth century's astonishing advances.

From AIDS to dinosaurs, from conservation to cloned sheep, bursting with anecdotes, jokes and irresistible facts, Almost Like a Whale is a popular account of the science that makes biology make sense. It will catch the millennial mood and tell all those for whom Darwin is merely a familiar name what he really meant. It exposes the Darwinian delusions which try (and fail) to explain human behaviour in evolutionary terms, and, while giving an up-to-date account of our own past, shows how humans are the first species to step beyond the constraints of biology.

Steve Jones describes Darwin's The Origin of Species as "the only bestseller to change man's conception of himself ... without doubt, the book of the millennium." That book's sensational central proposition, that speciation arose from descent with modification through the mechanism of natural selection, constituted a kind of Grand Unifying Theory of the biological sciences, allowing what had been until Darwin's time an essentially anecdotal practice to cohere into a modern discipline. In the century and a half since its publication, Darwin's big idea has been attacked many times, on many grounds, but has never convincingly been refuted. Yet, as Jones points out, hardly anybody reads The Origin of Species now for its science. It is celebrated as a landmark in the history of ideas, as a contribution to the philosophy of science and as a masterly work of high Victorian prose. The idea of evolution has pervaded almost every aspect of human thought. But it has almost been forgotten that it is primarily a work of science. Almost like a Whale is an attempt to redress the balance. Jones, himself a geneticist, assumes the mantle of Darwin and rewrites his masterpiece for the modern reader, borrowing the structure and thesis but writing with the benefit of 150 years' hindsight. Throughout the 20th century new sciences have emerged that have in all cases buttressed the central claims of evolution, chief among them embryology and Jones' own discipline of genetics. Almost Like a Whale draws widely on them for its arguments and many illuminating stories and case- studies.

It is a bold and ambitious project, carried off with considerable style and wit. Any suspicion of lightness is misplaced, though, as the seriousness and profundity of the underlying arguments are signalled early in the book: Jones destroys one of the main creationist objections to the theory of evolution--that no-one has ever seen it happen--with a devastating account of the well-documented 50-year evolution of the AIDS virus into its present varieties. The title is not a near-miss reference to Hamlet: it is Darwin himself, speculating on whether a bear seen swimming and catching food with its mouth as it swam, might represent the first, behavioural step on an evolutionary journey towards a new creature" almost like a whale." This is a powerfully entertaining book, engrossing in its science, erudite and cogent. --Robin Davidson

"'Inspired by his modernising pen, the old bones throw off their dust and dance the boogie...a richly readable introduction to the science that The Origin of Species invented'" (Mark Ridley The Sunday Times)

"'A celebration of the unarguable rightness of Darwin's case, updated to take into account our century's advances, particularly in genetics...his writing is clear, precise, declamatory, often illuminating...he allies the macro and the micro, using tales of dogs and snails and polyps and islands, to create a work of persuasion rather than polemic' " (Euan Ferguson Observer)

"'To rewrite Darwin requires considerable skill, bravado, and, possibly, a touch of madness. Jones clearly has more than his fair share of all three...a barnstorming tour of modern genetics and its implications for evolutionary theory'" (Kenan Malik Independent on Sunday)

"'The richness is almost overwhelming, and I am awed by Jones's reading...hugely enjoyable'" (Steven Rose Independent)

"'Explains the workings of evolution, as they are now understood, with beautiful clarity and, naturally, with a lot more fun and jokes than Darwin ever allowed himself. The book is a pleasure to read'" (Mary Midgley New Statesman)

Book Description Paperback. Condition: new. Paperback. As 1862300259 In his new book, Steve Jones takes on the challenge of going back to the book of the millennium, Charles Darwin's The Origin of Species. Shipping may be from multiple locations in the US or from the UK, depending on stock availability. Seller Inventory # 9780552999588

Almost Like a Whale: The 'Origin of Species' Updated

Almost Like a Whale : The 'Origin of Species' Updated

Book Description Paperback / softback. Condition: New. New copy - Usually dispatched within 4 working days. In his new book, Steve Jones takes on the challenge of going back to the book of the millennium, Charles Darwin's The Origin of Species. Seller Inventory # B9780552999588

Almost Like a Whale : The 'Origin of Species' Updated

Book Description Paperback. Condition: new. Paperback. As 1862300259 In his new book, Steve Jones takes on the challenge of going back to the book of the millennium, Charles Darwin's The Origin of Species. Shipping may be from our Sydney, NSW warehouse or from our UK or US warehouse, depending on stock availability. Seller Inventory # 9780552999588