Items related to Humanity: An Introduction to Cultural Anthropology

Humanity: An Introduction to Cultural Anthropology 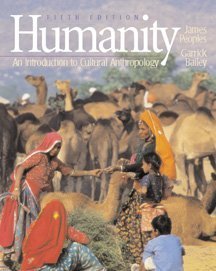 This mainstream introductory text has earned a reputation for the excellence of its research-oriented approach to the core principles of Cultural Anthropology. The text emphasizes the diversity of humanity and shows why an appreciation and tolerance of cultural difference is critical in the modern world.

"Peoples and Bailey's Humanity is the most "student-friendly" cultural anthropology text on the market today. Its lush full-color photographs have instant appeal to today's visually oriented learner, its text and structure make the content easy to follow and review, and its website activities are fun and challenging, with impressive live standby support. The authors' approach to anthropology is down-to-earth and lends itself to a variety of classroom debates and interpretations. It's rare to find a text that presents complex content so clearly without talking down to the reader, and that moves so smoothly from local examples to global concerns. It's one text I know my students will open and read!"

James Peoples is professor of Sociology/Anthropology and Director of East Asian Studies at Ohio Wesleyan University, where he has been teaching courses in anthropology since 1988. He has also taught in the anthropology departments of the University of California at Davis and the University of Tulsa. His geographic area of specialty is Micronesia, where he studied the impact of American subsidies on the island agricultural and cash economies. His first book, ISLAND IN TRUST (1985), summarized the results of this field research. Since becoming Director of East Asian Studies in 2004, Dr. Peoples has journeyed to Korea and Japan for seminars and workshops. He recently published a chapter, translated into Chinese, in a book used in cultural anthropology courses in the People's Republic of China. He has published most of the results of a comparative analysis of political evolution in Micronesia. Dr. Peoples also has co-authored ESSENTIALS OF CULTURAL ANTHROPOLOGY and INTRODUCTION TO CULTURAL ANTHROPOLOGY.