Items related to Hamlet without Hamlet 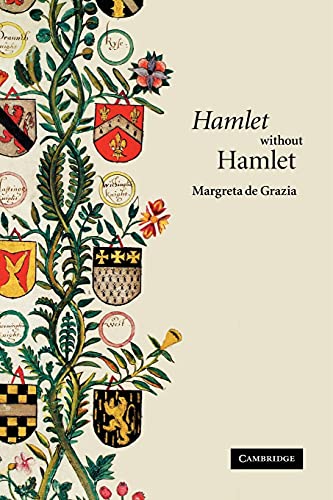 A study tracing the impact and evolution of Shakespeare's Hamlet.

'... boldly original and richly stimulating book ... one of the most rewarding critical accounts of this over-interpreted play to have appeared for some time.' Professor Dr Dieter Mehl

'... 'Hamlet' without Hamlet is a powerful, tremendously erudite, and often brilliantly inventive reckoning of what time has done to our ability to read, and to comprehend, Shakespeare's play.' Shakespeare Quarterly

'De Grazia certainly blows some dust off this most familiar of plays.' Plays International

'Anyone, at any level, interested in how drama engages with models of the mind will benefit from its author's combination of sophisticated and sensitive close-reading with compendious knowledge of the history of ideas and criticism.' New Theatre Quarterly

'This fascinating book is full of genuine insight; its analysis of critical history is salutary and worthwhile.' The Times Literary Supplement

This book challenges the common-place conception of Hamlet as an introverted figure, estranged from the world around him. It reveals the play as a drama of princely dispossession set in a volatile political context, whose concerns are crucially those of land and empire, inheritance and religion.

Book Description Paperback. Condition: New. Language: English. Brand new Book. 'Hamlet' without Hamlet sets out to counter the modern tradition of abstracting the character Hamlet from the play. For over two centuries, Hamlet has been valued as the icon of consciousness: but only by ignoring the hard fact of his dispossession. By admitting that premise, this book brings the play to life around man's relation to land, from graves to estate to empire. Key preoccupations are thereby released, including the gendered imperatives of genealogy, and man's elemental affinity to dust. As de Grazia demonstrates from the 400 years of Hamlet's afterlife, such features have disappeared into the vortex of an interiorized Hamlet, but they remain in the language of the play as well as in the earliest accounts of its production. Once reactivated, a very different Hamlet emerges, one whose thoughts and desires are thickly embedded in the worldly, and otherworldly, matters of the play: a Hamlet within Hamlet. Seller Inventory # AAV9780521690362

3. Hamlet Without Hamlet (Paperback or Softback)