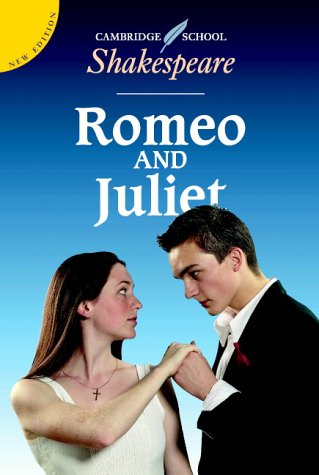 A new look at Romeo and Juliet in accordance with the work of the Shakespeare and Schools Project, the national curriculum for English and developments at GCSE and A Level. Cambridge School Shakespeare considers the play as theatre and the text as script, enabling pupils to inhabit the imaginative world of the play in an accessible, meaningful and creative way. This new edition features new and updated activities, extra help with language and a host of new photographs, many taken from Baz Luhrmann's recent film.

This is undoubtedly the greatest love story ever written, spawning a host of imitators on stage and screen, including Leonard Bernstein's smash musical West Side Story, Franco Zeffirelli's Romeo and Juliet filmed in 1968, and Baz Luhrmann's postmodern film version Romeo + Juliet. The tragic feud between "Two households, both alike in dignity/In fair Verona", the Montagues and Capulets, which ultimately kills the two young "star-crossed lovers" and their "death-marked love" creates issues which have fascinated subsequent generations. The play deals with issues of intergenerational and familial conflict, as well as the power of language and the compelling relationship between sex and death, all of which makes it an incredibly modern play. It is also an early example of Shakespeare fusing poetry with dramatic action, as he moves from Romeo's lyrical account of Juliet--"she doth teach the torches to burn bright!" to the bustle and action of a 16th-century household (the play contains more scenes of ordinary working people than any of Shakespeare's other works). It also represents an experimental attempt to fuse comedy with tragedy. Up to the third act, the play proceeds along the lines of a classic romantic comedy. The turning point comes with the death of one of Shakespeare's finest early dramatic creations--Romeo's sexually ambivalent friend Mercutio, whose "plague o' both your houses" begins the play's descent into tragedy, "For never was a story of more woe/Than this of Juliet and her Romeo". --Jerry Brotton

'These tapes are invaluable not just because of the quality of the diction and presentation but because they are based on the complete text as established by Philip Edwards for the New Cambridge Shakespeare edition of the plays. They may be used in conjunction with the plays or simply listened to for the sheer joy of hearing Shakespeare's wonderful language without having to endure the absurdities of so many modern productions.' Contemporary Review

'Well worth acquiring for any good audio collection.' AVL-Multimedia Information

'The CD jacket boasts of a performance of 'the complete text: fully dramatised' - a Shakespearean purist's dream ... a comprehensive and faithful treatment of the play'. Cahiers Elisabéthains