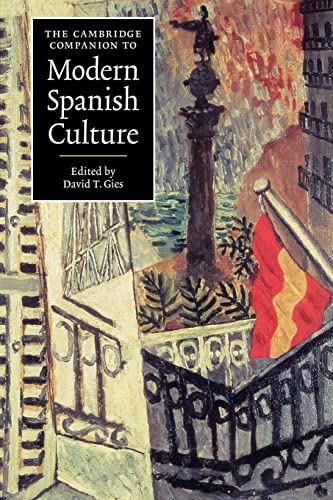 This book offers a comprehensive account of modern Spanish culture, tracing its dramatic and often unexpected development from its beginnings after the Revolution of 1868 to the present day. Specially-commissioned essays by leading experts provide analyses of the historical and political background of modern Spain, the culture of the major autonomous regions (notably Castile, Catalonia, and the Basque Country), and the country's literature: narrative, poetry, theatre and the essay. Spain's recent development is divided into three main phases: from 1868 to the outbreak of the Spanish Civil War; the period of the dictatorship of Francisco Franco; and the post-Franco arrival of democracy. The concept of 'Spanish culture' is investigated, and there are studies of Spanish painting and sculpture, architecture, cinema, dance, music, and the modern media. A chronology and guides to further reading are provided, making the volume an invaluable introduction to the politics, literature and culture of modern Spain.

"This book provides a thorough and penetrating view of modern Spain. The only book of its kind, The Cambridge Companion to Modern Spanish Culture will help guide the reader through this complicated yet dazzling era in Spain's cultural history." Virginia Quarterly Review

"A perusal of Modern Spanish Culture will provide a feast of information and opinions on Spain, thus preparing the reader to understand the nation and its future as it surges into the twenty-first century." Espana Contemporanea

This book offers a comprehensive account of modern Spanish culture from its beginnings in the Revolution of 1868 to the present day. Leading experts analyse historical and political issues, the culture of major regions including Castile, Catalonia, and the Basque Country, and the country's literary and artistic endeavours.

3. The Cambridge Companion to Modern Spanish Culture (Paperback or Softback)

Book Description 1999. Paperback. Condition: NEW. 9780521574297 This listing is a new book, a title currently in-print which we order directly and immediately from the publisher. For all enquiries, please contact Herb Tandree Philosophy Books directly - customer service is our primary goal. Seller Inventory # HTANDREE0463962