Items related to Classical Humanism and Republicanism in English Political... 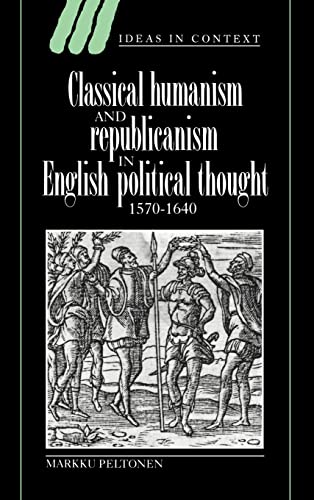 "Now Markku Peltonen assembles an impressive body of evidence that what he calls 'classical humanism' lived straight through to the outbreak of the Civil War and provides an important context for understanding the arguments put forward by seventeenth-century republicans." Sixteenth Century Journal

"...this book is a well-written and forceful contribution to a very live topic of discussion in current English historiography." History

"...the book's great value for scholars lies in its gathering together of a wealth of material relevant to its topic....Treatments of individual texts are lucid and perceptive. Peltonen has organized a body of evidence which should be taken into account in the ongoing analysis of this crucial period in the history of political thought." John F. McDiardmid, Renaissance Quarterly

This book looks anew at two major themes in English political thought before the Civil War. Central ideas of both humanist and republican traditions are analysed within their proper context, and Dr Peltonen reveals the continuity of those traditions in a period when they are usually considered to have been dormant.

Book Description CAMBRIDGE UNIVERSITY PRESS, United Kingdom, 2003. Hardback. Condition: New. Language: English. Brand new Book. Markku Peltonen examines humanist and republican themes in English political thinking between the mid-sixteenth century and the Civil War. He challenges the dominant view that humanism fizzled out in the middle of the sixteenth century only to re-emerge during the 1650s in the writings of such classical republicans as James Harrington and John Milton. The English continued to use central notions of the humanist tradition such as the virtuous civic life and vera nobilitas to portray themselves as citizens, characterizing their life as one of participation rather than subjection. They often resorted to openly republican themes - notably that governors be elected rather than hereditary - and the classical idea of the mixed constitution was profoundly influential. Dr Peltonen casts an important new perspective on these humanist and republican themes, and locates their uses in specific historical circumstances. Seller Inventory # LHB9780521496957

Book Description 1995. Hardback. Condition: NEW. 9780521496957 This listing is a new book, a title currently in-print which we order directly and immediately from the publisher. For all enquiries, please contact Herb Tandree Philosophy Books directly - customer service is our primary goal. Seller Inventory # HTANDREE0459807