Items related to The Merchant of Venice (Cambridge School Shakespeare) 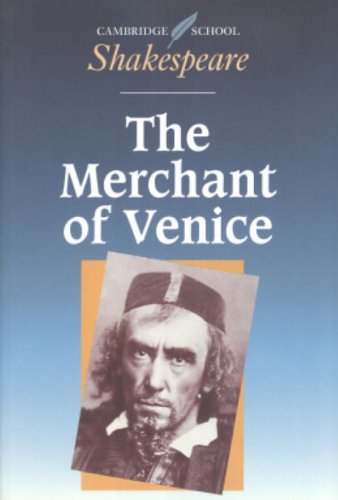 A new look at Shakespeare's play in accordance with the work of the Shakespeare and Schools Project, the National Curriculum for English, developments at GCSE and A-level, and the probable development of English and Drama throughout the 1990s. Cambridge School Shakespeare considers the play as theatre and the text as script, enabling pupils to inhabit the imaginative world of the play in an accessible, meaningful and creative way. Cambridge School Shakespeare approaches the plays in a new way, encouraging students to participate actively in examining them, to work in groups as well as individually, to treat each play as a script to be re-created, and to explore the theatrical/dramatic qualities of the text. The editorial comments cater for pupils of all ages and abilities, providing clear, helpful guidelines for school study. The format of the plays is also designed to help all teachers, whether experienced or inexperienced.

"Hath not a Jew eyes? Hath not a Jew hands, organs, dimensions, senses, affections, passions?" Shylock's impassioned plea in the middle of The Merchant of Venice is one of its most dramatic moments. After the Holocaust, the play has become a battleground for those who argue that the play represents Shakespeare's ultimate statement against ignorance and anti-Semitism in favour of a liberal vision of tolerance and multiculturalism. Other critics have pointed out that the play is, after all, a comedy that ultimately pokes fun at a 16th-century Jew. In fact, the bare outline of the plot suggests that the play is far more complex than either of these characterisations. Bassanio, a feckless young Venetian, asks his wealthy friend, the merchant Antonio, for money to finance a trip to woo the beautiful Portia in Belmont. Reluctant to refuse his friend (to whom he professes intense love), Antonio borrows the money from the Jewish moneylender. If he reneges on the deal, Shylock jokingly demands a pound of his flesh. When all Antonio's ships are lost at sea, Shylock calls in his debt, and the love and laughter of the first scenes of the play threaten to give way to death and tragedy. The final climactic courtroom scene, complete with a cross-dressed Portia, a knife-wielding Shylock, and the debate on "the quality of mercy" is one of the great dramatic moments in Shakespeare. The controversial subject matter of the play ensures that it continues to repel, divide but also fascinate its many audiences. --Jerry Brotton

'The introduction and commentary reveal an author with a lively awareness of the importance of perceiving the play as a theatrical document, one which comes to life, which is completed only in performance ...' --The Review of English Studies