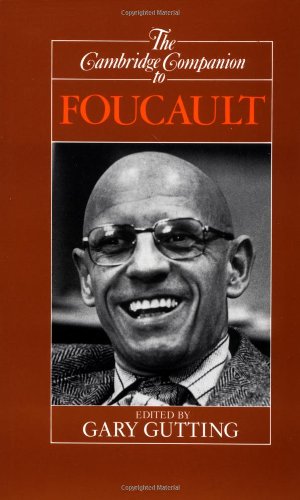 Each volume of this series of companions to major philosophers contains specially commissioned essays by an international team of scholars, together with a substantial bibliography, and will serve as a reference work for students and non-specialists. One aim of the series is to dispel the intimidation such readers often feel when faced with the work of a difficult and challenging thinker. Michel Foucault, one of the most important of contemporary French thinkers, exerted a profound influence on philosophy, history, and social theory. Foucault attempted to reveal the historical contingency of ideas that present themselves as necessary truths. He carried out this project in a series of original and strikingly controversial studies on the origins of modern medical and social scientific disciplines. These studies have raised fundamental philosophical questions about the nature of knowledge and its relation to power structures that have become major topics of discussion throughout the humanities and social sciences.

"The Cambridge Companion series has as its goal to offer overviews of the major themes and concerns of important thinkers in the Western philosophical tradition. The Cambridge Companion to Foucault fulfills this task admirably and in addition presents several important new substantive perspectives on Foucault's works. This is unsurprising, since the authors of the various chapters include almost every major Foucaultian thinker outside of France." Ethics "I found the individual chapters to be consistently of high quality and remarkably free of the somewhat inscrutable language I, as a layman, find in Foucault. In short, it meets the claim Gutting establishes early on, "this set of essays does hope to provide an informal and reasonably accessible guide to most of Foucault's major works and themes" (vii)." Perspectives on Political Science

This volume presents a systematic and comprehensive overview of Foucault's major themes and texts, from his early work on madness through his history of sexuality, and relates his work to significant contemporary movements such as critical theory and feminism.