Items related to Troilus and Cressida (The New Cambridge Shakespeare) 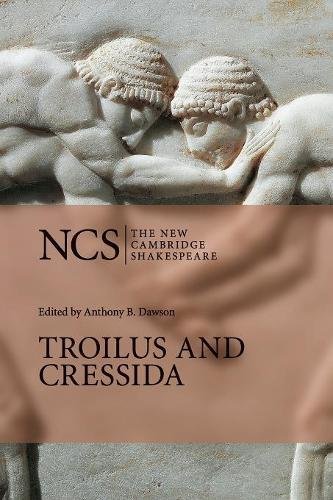 Troilus and Cressida, long considered one of Shakespeare's most problematic plays, is both difficult and fascinating. Largely neglected during the eighteenth and nineteenth centuries it has recently proved popular and rewarding on the stage as well as in the study. This edition questions certain received ideas about the play's text, especially the relationship between quarto and folio and offers several new readings of old problems. Dawson's textual choices are often surprising but at the same time carefully grounded. He views the play from a performance perspective - both in the commentary as well as in the detailed section on stage history in the introduction. The introduction also covers the cultural context in which the play was written, probes the controversy about its early performance and provides extensive analysis of character, language, genre and contemporary significance.

One of Shakespeare's most notoriously difficult and cynical plays, labelled a "Problem Comedy", Troilus and Cressida has perplexed critics and theatre directors, and after Shakespeare's lifetime it was not performed again until 1907. In many ways the play's difficulty is a surprise; the story of Troilus and Cressida was a popular theme, drawn from Homer's Iliad and Chaucer's own Troilus and Criseyde, as was its classical setting, the Greek siege of Troy, led by Agamemnon, Achilles, Ajax, Diomedes and Ulysses.

Within the walls of Troy, Prince Troilus falls madly in love with Cressida, daughter of the deserter Calchas. His love is intense and frenetic--"I am giddy, expectation whirls round me," but turns to bitter disillusion when Cressida defects to the Greek camp and flirts with Diomedes. As the war and conflict over the abduction of Helen whirls around the doomed romance, the play delights in its complex syntax and cynical images of waste, decay, corruption and mutability, summed up in Ulysses' comment that, "Love, friendship, charity, are subjects all / To envious and calumniating time." The play's cynical open-ended quality has frustrated many readers, but gives the play a remarkably modern, contemporary sensibility. --Jerry Brotton

'I commend this new edition particularly for the introductory sections.' Shakespeare at the Centre Magazine

'... fine new edition ... Anthony B. Dawson's readable and reliable text, together with his excellent explanatory footnotes and his superb discussion of theatrical adaptations of the play, will make this edition a valuable resource for scholars as well as an attractive text for classroom use.' Shakespeare Quarterly