Items related to The Empire Project: The Rise and Fall of the British...

Darwin, John The Empire Project: The Rise and Fall of the British World-System, 1830-1970 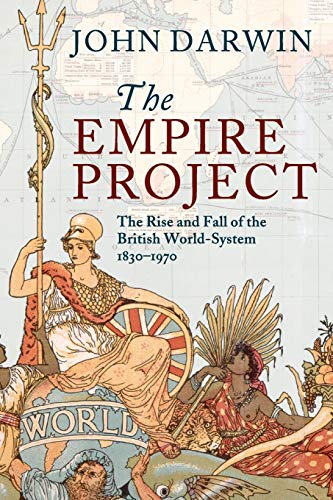 The British Empire, wrote Adam Smith, 'has hitherto been not an empire, but the project of an empire' and John Darwin offers a magisterial global history of the rise and fall of that great imperial project. The British Empire, he argues, was much more than a group of colonies ruled over by a scattering of British expatriates until eventual independence. It was, above all, a global phenomenon. Its power derived rather less from the assertion of imperial authority than from the fusing together of three different kinds of empire: the settler empire of the 'white dominions'; the commercial empire of the City of London; and 'Greater India' which contributed markets, manpower and military muscle. This unprecedented history charts how this intricate imperial web was first strengthened, then weakened and finally severed on the rollercoaster of global economic, political and geostrategic upheaval on which it rode from beginning to end.

'The Empire Project is a brilliant and highly readable account of one of the great themes in modern history. It will attract the general reader as well as fellow historians because of the sweep of the narrative from the early part of the nineteenth century to the end of Empire in the 1970s. It possesses compelling insight into the links between India, the 'white dominions' and the colonial dependencies throughout the world. This is a life's work and a landmark in the subject.' Wm. Roger Louis, author of Ends of British Imperialism: the Scramble for Empire, Suez, and Decolonization

'Historians are more than ever inclined to fight shy of over-arching histories of Britain's empire. Nothing daunted, and with style, splendid assurance, and encyclopaedic knowledge John Darwin unravels the dynamic connections and external pressures that forged a British world system and then influenced its dissolution. His account will command attention for years to come.' Andrew Porter, author of European Imperialism, 1860–1914

'John Darwin's The Empire Project: The Rise and Fall of the British World System, 1830–1970 is surely now the finest, and will be the most influential, general survey of British imperial history.' Independent

'... a hugely insightful book that questions lazy notions of 'hegemonic' power. It's a brilliant marriage of the scholarly to the readerly.' Edward Quipp, The Times Higher Education Supplement

'With its clear narrative, detailed analysis and penetrating insight, Andrew Porter is right that it 'will command attention for years to come'. This is certainly the book to read if you are teaching British colonisation.' Historical Association

'[Darwin has] inspired generations of Oxford undergraduates at Nuffield College. Now we get a chance to eavesdrop on all those tutorials and lectures. The result is a finely tuned panoramic study of the British Empire that grasps a thorny issue: the complex relationship between Britain as an imperial power and Britain as a world power, and how those tensions were understood at the time and resolved (or not) ... The scholarship and the writing are faultless. Expect prose sprinkled with musicality (such as the 'long diminuendo' of decline) and delightful details, especially Lord Salisbury's classic definition of the diplomatic arts: 'sleepless tact, immovable calmness, a series of microscopic advantages ... serene, impassive intelligence'. The imperial politics of the white Dominions might be boring compared with those of Africa or India, but Darwin makes them almost captivating.' Joanna Lewis, The Times Higher Education Supplement

'... there is no doubting the high quality of Darwin's book. It is based on profound scholarship, is engaging and inquiring, and shows a mastery of both the detail and the bigger picture ... It is not merely in the grand overview and in the skilful synthesising of so much material that Darwin impresses. The book is also a masterly work of exposition and analysis. On almost every page one is aware of the sheer weight of scholarship that is able not merely to present information clearly and with ease, but also to draw together a host of facts, interpretations, even speculation, and continually make sense of it all.' The Times Literary Supplement

'... this is the best general history of British imperialism to date; a tremendous achievement.' Bernard Porter, British Scholar

A magisterial global history of the rise and fall of the British Empire during the nineteenth and twentieth centuries. John Darwin charts how the Empire was first strengthened, then weakened and finally severed on the rollercoaster of global economic, political and geostrategic upheaval on which it rode from beginning to end.