The English Rising of 1381 (Past and Present Publications)

The English Rising of 1381 (Past and Present Publications) 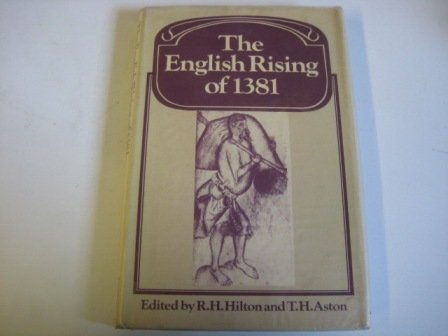 This book contains eight articles, six of which are based on papers contributed to a commemoration conference organised by the Past and Present Society in 1981. Two further articles and an introduction are contributed by other experts. They explore the various dimensions of the rising of 1381: the discontent of peasants and townspeople who became politicised in response to government tax demands; reasons for the attitudes of the subordinated classes to the law, which they perceived as being the instrument of their oppressors; the response of the ruling class and its government to one of the most coherent challenges to feudal order in the Middle Ages. In addition, two contributions on social movements in fourteenth-century France and Italy show that the rising can be regarded as a symptom of the general crisis of European feudal society in the later Middle Ages.

'... this short volume is a treasury of information concerning the social and political conflicts which [the events of 1381] expressed.' Agricultural History Review

'Historians of the Rising of 1381 must now rend the veil of the Poll Taxes, that neat and easy, but insufficient, explanation for what happened ... These essays have served to illuminate several aspects of the climate of revolt in France and Florence, but predominantly in England, in the second half of the fourteenth century.' Economic History Review

The rising of 1381 was 'one of the most portentous events in the whole of our history', to quote the famous medievalist William Stubbs. It has been the subject of many works, specialized and popular, especially since the 600th anniversary in 1981. This present volume eschews general narrative history.

3. The English Rising of 1381 (Past and Present Publications)