Items related to The Cambridge Illustrated History of the Middle Ages:... 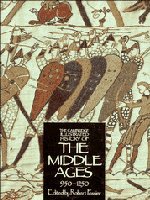 This is the second volume of one of the finest general introductions to the medieval world of recent times, first published in French by Armand Colin. Volume II begins at the turn of the millennium and covers the extraordinary rebirth of Europe, in terms of demographic expansion, agrarian settlement and organisation, the establishment of towns and villages, the ascendancy of the feudal system, the appearance of formal states and kingdoms, and the dramatic controlling ascendancy of the western Church. In the east, despite the external appearance of grandeur, the Islamic countries were being torn apart by mutual rivalry, while the Byzantime empire lost massive border territories through political and economic incompetence. Full coverage is given to both east and west, and their artistic heritage is displayed lavishly in many of the colour plates. A comprehensive bibliography is also included.

Covers the close of the Middle Ages, an era of crisis, plague, famine and civil strife, and yet also, towards the end, of vigorous economic and colonial expansion, intellectual renewal and religious reformation.