Items related to The Language and Logic of the Bible: The Earlier Middle...

Evans, G. R. The Language and Logic of the Bible: The Earlier Middle Ages

The Language and Logic of the Bible: The Earlier Middle Ages 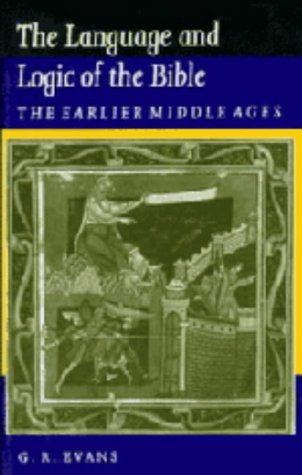 All the apparatus of learning in the earlier Middle Ages had the ultimate purpose - at least in principle - of making it possible to understand the Bible better. The fathers laid foundations on which their successors built for a thousand years and more, which helped to form and direct the principles of modern criticism. This study looks at the assumptions within which students of the Bible in the West approached their reading, from Augustine to the end of the twelfth century, when distinct skills in grammar and logic made it possible to develop more refined critical methods and to apply fresh tools to the task.

'Many people will certainly be delighted, as I was, to read such clever and sympathetic pages about Rupert of Deutz, Abelard, Peter of Chanter, and of course (as Dr Evans is one of his most affectionate scholars) Anselm of Canterbury.' New Blackfrairs

'The presuppositions, methods and habits of Latin writers of the eleventh and twelfth centuries are learnedly examined and lucidly expounded, with a glance back to Augustine and Gregory ... The interplay of philosophy and tradition with sacred text makes fascinating reading.' Society for Old Testament Study Booklist

'Constant allusions to particular persons at concrete moments keep the narrative down to earth and unremote ... individuals are not subsumed beneath grand general categories ... The story is rather traced honestly, receptively, and flexibly from the works, practices, and life-histories of recognizable persons.' Journal of Theological Studies

This is a sequel to the author's The Language and Logic of the Bible: The Earlier Middle Ages. The period of the reformation saw immense changes of approach to the study of the Bible, which in turn brought huge consequences.

1. THE LANGUAGE AND LOGIC OF THE BI

2. THE LANGUAGE AND LOGIC OF THE BI