Items related to The Book of the Dead: Hieroglyphic Transcript and Translatio...

Sir E A Wallis Budge The Book of the Dead: Hieroglyphic Transcript and Translation into English of the Papyrus of Ani

The Book of the Dead: Hieroglyphic Transcript and Translation into English of the Papyrus of Ani 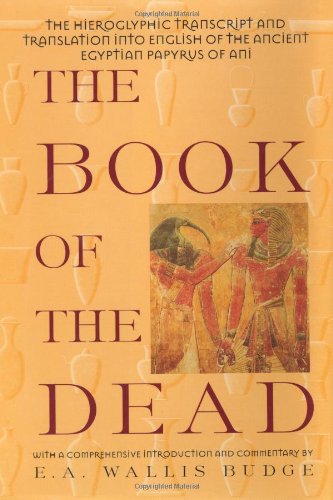 Including the Hieroglyphic Transcript and English Translation of the Papyrus of Ani
Fascinating compendium of ancient Egyptian mythology, religious beliefs and magical practices. Includes spells, incantations, hymns, magical formulas and prayers. All explained by one of the most knowledgeable and respected Egyptologists of the early 20th century. B&W illustrations, photographs and hieroglyphics throughout. 704 pages.

Sir Ernest Alfred Thompson Wallis Budge (27 July 1857 – 23 November 1934) was an English Egyptologist, Orientalist, and philologist who worked for the British Museum and published numerous works on the ancient Near East. He made numerous trips to Egypt and the Sudan on behalf of the British Museum to buy antiquities, and helped it build its collection of cuneiform tablets, manuscripts, and papyri. He published many books on Egyptology, helping to bring the findings to larger audiences. In 1920 he was knighted for his service to Egyptology and the British Museum. E.A. Wallis Budge was born in 1857 in Bodmin, Cornwall, to Mary Ann Budge, a young woman whose father was a waiter in a Bodmin hotel. Budge's father has never been identified. Budge left Cornwall as a boy, and eventually came to live with his maternal aunt and grandmother in London. Budge became interested in languages before he was ten years old, but left school at the age of twelve in 1869 to work as a clerk at the retail firm of W.H. Smith, which sold books, stationery and related products. (It continues to do so.) In his spare time, he studied Hebrew and Syriac with the aid of a volunteer tutor named Charles Seeger. Budge became interested in learning the ancient Assyrian language in 1872, when he also began to spend time in the British Museum. Budge's tutor introduced him to the Keeper of Oriental Antiquities, the pioneer Egyptologist Samuel Birch, and Birch's assistant, the Assyriologist George Smith. Smith helped Budge occasionally with his Assyrian. Birch allowed the youth to study cuneiform tablets in his office and obtained books for him from the British Library of Middle Eastern travel and adventure, such as Sir Austen Henry Layard's Nineveh and Its Remains. From 1869 to 1878, Budge spent his free time studying Assyrian, and during these years, often spent his lunch break studying at St. Paul's Cathedral. John Stainer, the organist of St. Paul's, noticed Budge's hard work, and met the youth. He wanted to help the working-class boy realize his dream of becoming a scholar. Stainer contacted W.H. Smith, a Conservative Member of Parliament, and the former Liberal Prime Minister William Ewart Gladstone, and asked them to help his young friend. Both Smith and Gladstone agreed to help Stainer to raise money for Budge to attend Cambridge University. Budge studied at Cambridge from 1878 to 1883.

Translated from the Papyrus of Ani in the British Museum and accompanied by illustrations of ancient Egyptian art and artifacts, this collection of ancient Egyptian texts includes a range of words of power and prayer, myths, spells and incantations, hymns, and more.

1. The Book of the Dead: The Hieroglyphic Transcript & Translation into English of the Ancient Egyptiia

2. The Book of the Dead: The Hieroglyphic Transcript & Translation into English of the Ancient Egyptiia

3. The Book of the Dead: The Hieroglyphic Transcript & Translation into English of the Ancient Egyptiia Budge, E.A. Wallis