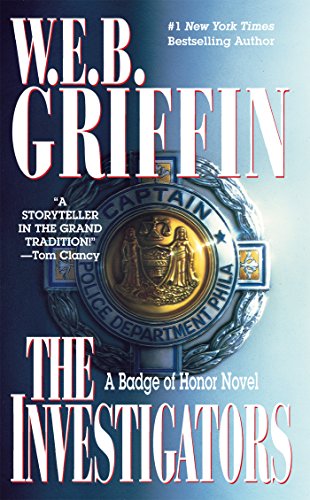 In "The Investigators," circumstances force Special Operations detective Matt Payne and his colleagues into the middle of two major cases simultaneously. With the commission of a brutal crime, an ongoing investigation into a squad of dirty cops suddenly grows ugly, and Payne must track down a key piece of evidence before things become even worse. At the same time, a woman he meets at a party may turn out to be a vital link to a group of urban terrorists, and if he doesn't follow it up now, the lead will disappear. During the next few days, as he juggles both cases and an increasingly complicated personal life, Payne finds himself drawn deeper and deeper into the circles of some very dangerous characters, and soon comes to realize that it may take all of his skills not only to prevail - but perhaps simply to survive.

Special Operations detective Matt Payne and his colleagues find themselves drawn into two dangerous cases simultaneously as an ongoing investigation into a squad of dirty cops turns deadly and a chance encounter at a party leads Payne to a woman who may hold the key to a gang of urban terrorists.

W. E. B. Griffin is the author of seven bestselling series: The Corps, Brotherhood of War, Badge of Honor, Men at War, Honor Bound, Presidential Agent, and now Clandestine Operations. He lives in Fairhope, Alabama, and Buenos Aires, Argentina.

3. THE INVESTIGATORS (BADGE OF HONO

Book Description G.P. Putnam's Sons, 1998. Mass Market Paperback. Condition: New. FREE delivery upgrade - If you live in the USA this item will arrive in 4 to 6 business days when you choose the lowest cost shipping method when checking out. Excellent condition. Interior is tight, bright and clean; no underlining, notes or highlighting. Binding is smooth and solid. Paperback cover is clean and sticker free. 100% Satisfaction Guaranteed. All items are carefully enclosed with bubble wrap. We ship promptly and worldwide via US Post and will email you a tracking number. Seller Inventory # SKU0051015

6. The Investigators (Paperback or Softback)

Book Description Mass Market Paperback. Condition: New. Mass Market Paperback. A brutal crime.A group of urban terrorists.An investigation of dirty cops. The leads in these supposedly unconnected cases have become tangled in some very ugly?and.Shipping may be from multiple locations in the US or from the UK, depending on stock availability. 578 pages. 0.272. Seller Inventory # 9780515124064