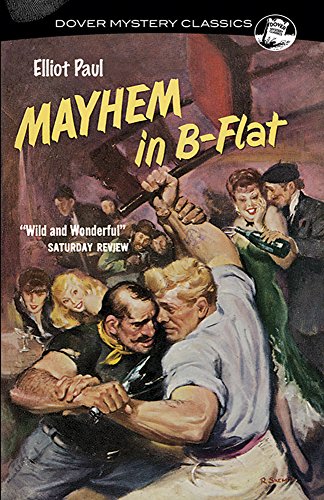 "A sizzling concoction of murder, merriment, and madness." ― Saturday Review. While vacationing in Normandy, suave sleuth Homer Evans and his stylish, pistol-packing companion Miriam Leonard catch sight of a notorious gang member. The two spot him again upon their departure from the Rouen train station, when he appears to be covertly signaling to someone in their compartment. The compartment's occupants include a very proper Bostonian with a formidable dog; the Bostonian's attractive sister; and the celebrated American violinist Anton Diluvio, along with his priceless Guarnerius. Dog and violin have a near-fatal encounter as the train enters the Gare St. Lazare, but fate does not play its full hand until the following evening. By the end of Diluvio's concert in the great Salle Gaveau, someone from the train compartment will be dead and the Guarnerius will have disappeared ― and with it, Diluvio's eccentric accompanist. A mixture of serious detection and madcap adventure, this stylish whodunit unfolds against a richly evoked background of Paris in the 1930s.

American author and journalist Elliot Paul (1891–1958) belonged for a time to the 1920s expatriate community of Paris, where he wrote for the Paris Herald. With the outbreak of World War II, he returned to the United States and worked as a Hollywood screenwriter.