Items related to Einstein's Theory of Relativity (Dover Books on... 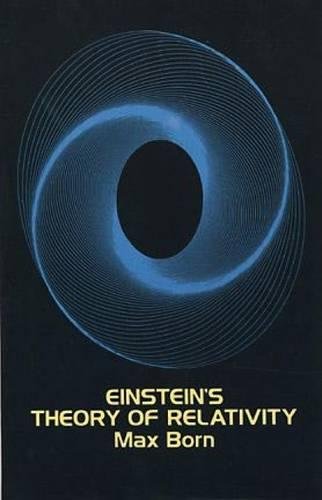 This excellent, semi-technical account includes a review of classical physics (origin of space and time measurements, Ptolemaic and Copernican astronomy, laws of motion, inertia, and more) and coverage of Einstein's special and general theories of relativity, discussing the concept of simultaneity, kinematics, Einstein's mechanics and dynamics, and more.

Book Description Paperback. Condition: New. Revised edition. Language: English. Brand new Book. A book in which one great mind explains the work of another great mind in terms comprehensible to the layman is a significant achievement. This is such a book. Max Born is a Nobel Laureate (1955) and one of the world's great physicists: in this book he analyzes and interprets the theory of Einsteinian relativity. The result is undoubtedly the most lucid and insightful of all the books that have been written to explain the revolutionary theory that marked the end of the classical and the beginning of the modern era of physics.The author follows a quasi-historical method of presentation. The book begins with a review of the classical physics, covering such topics as origins of space and time measurements, geometric axioms, Ptolemaic and Copernican astronomy, concepts of equilibrium and force, laws of motion, inertia, mass, momentum and energy, Newtonian world system (absolute space and absolute time, gravitation, celestial mechanics, centrifugal forces, and absolute space), laws of optics (the corpuscular and undulatory theories, speed of light, wave theory, Doppler effect, convection of light by matter), electrodynamics (including magnetic induction, electromagnetic theory of light, electromagnetic ether, electromagnetic laws of moving bodies, electromagnetic mass, and the contraction hypothesis). Born then takes up his exposition of Einstein's special and general theories of relativity, discussing the concept of simultaneity, kinematics, Einstein's mechanics and dynamics, relativity of arbitrary motions, the principle of equivalence, the geometry of curved surfaces, and the space-time continuum, among other topics. Born then points out some predictions of the theory of relativity and its implications for cosmology, and indicates what is being sought in the unified field theory.This account steers a middle course between vague popularizations and complex scientific presentations. This is a careful discussion of principles stated in thoroughly acceptable scientific form, yet in a manner that makes it possible for the reader who has no scientific training to understand it. Only high school algebra has been used in explaining the nature of classical physics and relativity, and simple experiments and diagrams are used to illustrate each step. The layman and the beginning student in physics will find this an immensely valuable and usable introduction to relativity. This Dover 1962 edition was greatly revised and enlarged by Dr. Born. Seller Inventory # AAC9780486607696