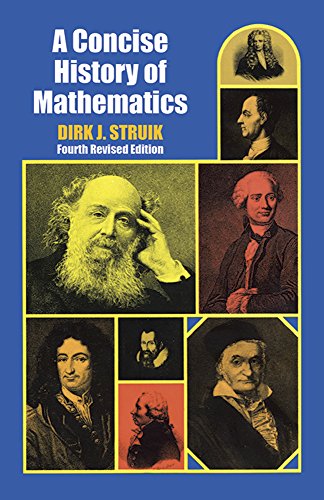 Dirk J. Struik: A Birthday Celebration
Dirk. J. Struik was born in Rotterdam in 1894 and spent most of his teaching career at MIT; he retired in 1960. His Lectures on Classical Differential Geometry, reprinted by Dover in 1988, is still a highly regarded classic, as is his Concise History of Mathematics, one of the first Dover original books in mathematics and first published by Dover in 1948, which reached its current fourth revised edition in 1987.
Professor Struik died on October 21, 2000, twenty-one days after his 106th birthday. Professor. Thomas F. Banchoff of Brown University, longtime friend and colleague of Dr. Struik and an advisor to Dover for the past 30 years, here tells the story of his friend's memorable 100th birthday celebration:
"Dirk Struik was 97 at the time I asked him what he planned to do on his hundredth birthday. He said that his family always had a party, but I then thought of a bright idea, a public celebration lecture where he would sit in the front row and hear people from his past say laudatory things about his contributions. I blurted out, 'What about a lecture on your hundredth birthday?' Without hesitation, he agreed, and that was the start of a grand event.
"Well over two hundred fifty people attended his lecture, about a third who knew him from his mathematical writings, another third acquainted with his work in history and politics, and, according to one wag, the rest wanting to see a hundred-year-old man stand up for an hour. Joan Richards gave a sterling introduction covering the many aspects of his long career. The talk itself was full of personal reflections about the characteristics of these almost legendary figures in modern mathematics and the audience was most appreciative.
"Dirk Struik went on giving lectures, in the United States and in the Netherlands for the next four years. He was a good friend to many people in his long life, and his books on so many subjects will continue to provide inspiration and encouragement to generations of students and teachers." — Tom Banchoff

Traces development of concepts and techniques in mathematics and identifies important mathematicians of the past.

1. A Concise History of Mathematics (Paperback)

Book Description Dover Publications Inc., United States, 1987. Paperback. Condition: New. 4th Revised edition. Language: English. Brand new Book. This compact, well-written history -- first published in 1948, and now in its fourth revised edition -- describes the main trends in the development of all fields of mathematics from the first available records to the middle of the 20th century. Students, researchers, historians, specialists -- in short, everyone with an interest in mathematics -- will find it engrossing and stimulating.Beginning with the ancient Near East, the author traces the ideas and techniques developed in Egypt, Babylonia, China, and Arabia, looking into such manuscripts as the Egyptian Papyrus Rhind, the Ten Classics of China, and the Siddhantas of India. He considers Greek and Roman developments from their beginnings in Ionian rationalism to the fall of Constantinople; covers medieval European ideas and Renaissance trends; analyzes 17th- and 18th-century contributions; and offers an illuminating exposition of 19th century concepts. Every important figure in mathematical history is dealt with -- Euclid, Archimedes, Diophantus, Omar Khayyam, Boethius, Fermat, Pascal, Newton, Leibniz, Fourier, Gauss, Riemann, Cantor, and many others. For this latest edition, Dr. Struik has both revised and updated the existing text, and also added a new chapter on the mathematics of the first half of the 20th century. Concise coverage is given to set theory, the influence of relativity and quantum theory, tensor calculus, the Lebesgue integral, the calculus of variations, and other important ideas and concepts. The book concludes with the beginnings of the computer era and the seminal work of von Neumann, Turing, Wiener, and others.The author's ability as a first-class historian as well as an able mathematician has enabled him to produce a work which is unquestionably one of the best. -- Nature Magazine. Seller Inventory # AAZ9780486602554

4. A CONCISE HISTORY OF MATHEMATICS

5. A CONCISE HISTORY OF MATHEMATICS

Book Description Paperback. Condition: New. 4th. Paperback. This compact, well-written history covers major mathematical ideas and techniques from the ancient Near East to 20th-century computer theory, surveying the works of Archimedes, Pascal, Gau.Shipping may be from multiple locations in the US or from the UK, depending on stock availability. 256 pages. 0.353. Seller Inventory # 9780486602554

10. A Concise History of Mathematics