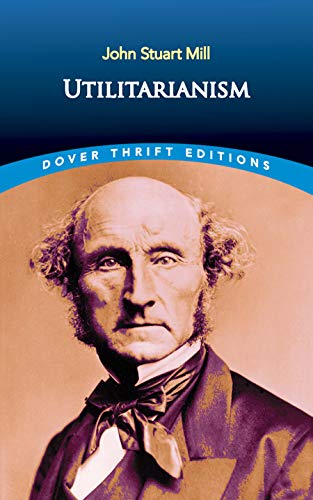 A landmark of moral philosophy and an ideal introduction to ethics, this famous work balances the claims of individuals and society, declaring that all actions should produce the greatest happiness overall. It remains as relevant today as it was to intellectual and moral dilemmas of the 19th century.

Reissued in its corrected 1864 second edition, this work by the philosopher John Stuart Mill (1806–73) argues for a utilitarian theory of morality, refining Bentham's 'greatest happiness' principle and defending it from common criticisms. Mill's key discussion on the topic, it remains a fundamental text in ethics.

John Stuart Mill(1806 - 1873) was a London born renowned philosopher and economist, who greatly influenced the structure of British thought and political discourse. Extensively educated in his childhood, he had studied Plato, Aristotle and other world classics by the age of 16. He served in the East India Company and through his work, he emphasised greater individual liberty, women's rights and human progress. A new depth and a greater horizon was lent by him to the theory of Utilitarianism.

Book Description Dover Publications Inc., United States, 2007. Paperback. Condition: New. Language: English. Brand new Book. How do we decide what is "good" and what is "bad"? According to the ethical theory of Utilitarianism, to do good is to "always perform that act, of those available, that will bring the most happiness or the least unhappiness." By far the most widely read introduction to this theory, John Stuart Mill's Utilitarianism is one of the most important and controversial works of moral philosophy ever written.In this major contribution to ethical history, Mill's treatise defends the view that all human action should produce the greatest happiness overall, and that happiness itself is made up of "higher pleasures," such as the cultural, intellectual, and spiritual, and "lower pleasures," such as the physical. The relationship of utilitarian theory to other ethical systems, and powerful arguments in its favor -- especially when concerning justice -- are brilliantly discussed. How do we weigh options to maximize happiness for self and for those around us? From common-day dilemmas to large-scale social decisions, this exposition remains as relevant today as it was to intellectual and moral dilemmas of the nineteenth century. Seller Inventory # AAC9780486454221

Book Description Paperback. Condition: New. Paperback. A reprint of the Longmans, Green, Reader, and Dryer, London, 1871 edition. A landmark of moral philosophy and an ideal introduction to ethics, this famous work balances the claims of indiv.Shipping may be from multiple locations in the US or from the UK, depending on stock availability. 55 pages. 0.249. Seller Inventory # 9780486454221