Items related to The Call of the Wild (Dover Evergreen Classics) (Dover... 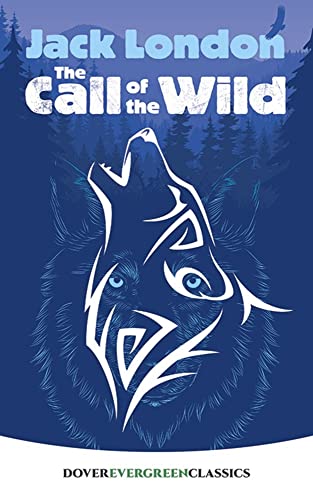 Buck, a sturdy crossbreed canine, is seized from his pampered family surroundings and shipped to the forbidding landscape of the Alaskan frontier to be a sled dog. As gripping today as it was when first published over a century ago, this classic tale of survival remains one of London's most popular adventures.

William Roberts gives a gruff backwoods urgency to the tale of Buck, a kidnapped St Bernard/collie cross who becomes the toughest sled dog in the Yukton - yet awards his final loyalty not to fickle men but to the wolf pack. --Christina Hardyment, The Times

In the great tradition of classic animal stories, Jack London's CALL OF THE WILD, read by William Roberts, is a wrenching story. From the peril Buck the sled dog faces in the Arctic to the suffering he endures under brutal masters, listening to his adventure is no tame experience. Roberts has a voice that could have belonged to one of this era's gold panners. He sounds like a grizzled man who would never display overt emotion but who, nonetheless, can tell a captivating yarn. While Roberts doesn t use great character range, he lets London s writing especially the passages about the mysterious, enchanting call of the wild ring with its startling beauty. --AudioFile

Jack London's deceptively simple direct way of writing combined with one of best dog stories ever, is why this book is such an enduring classic. And TV, film and stage actor William Roberts's reading is perfect. His robust voice, his ability to keep listeners glued, and the fond care with which he reads is spellbinding. When gold is found in the Klondike, there is a great need for sled dogs. Buck, part St. Bernard and part Scotch shepherd is stolen and moves from his happy life as king of the Santa Clara ranch where he lives a life of adventure, peril, though also often cruelty, to Alaska. There is a string of tales from his taming to the ways of sled pulling, to the inept trio who are doomed, dog fighting, survival, and finally to meeting John Thornton and their mutual love and understanding for one another. The longer he lives in Alaska, the more in tune with the ancestral ways of his dog ancestors Buck becomes, dreaming of old half clad masters and shades of all manner of dogs, half-wolves and wild wolves until he is drawn deep into the wilderness. This listener found this to be one of the best recordings I've listened to in a long time; I had to be careful while driving and listening because I got caught up in being in one of my favorite places and living the life of a dog. Any parent or librarian looking for something short and exciting for a child, young adult or family listening can't go wrong with Roberts's performance and Call of the Wild, a guaranteed hit! --Mary Purucker, SoundCommentary.com

This was the story first published in 1903 that made the struggling writer Jack London famous. Listen to William Roberts's majestic reading and you will understand why. Set in the 1890s Klondike gold rush, it tells how Buck, a huge wolfhound, is stolen from his pampered Californian home and becomes a sled dog in the arctic wastes of the Yukon. As brutal as his successive masters are, the pack of dogs he is harnessed alongside is even deadlier. How Buck survives the rule of club and fang is a classic, once misguidedly described as a children's book because it is narrated by a dog. Of course it is an allegory civilisation versus the old primordial instinct for survival at any price but for pure excitement and adventure it has no equal. --Sue Arnold, The Guardian

Any parent or librarian looking for something short and exciting for a child, young adult or family listening can't go wrong with Roberts s performance of Call of the Wild, a guaranteed hit! --Mary I. Purucker

Novelist, journalist, and social activist Jack London (1876–1916) rose from abject poverty to international fame. The bestselling, highest-paid, and most popular author of his era, London created a substantial body of work in his short life, drawing upon his experiences as a cannery worker, sailor, railroad hobo, and prospector.

1. The Call of the Wild (Dover Evergreen Classics)

2. The Call of the Wild (Dover Children's Evergreen Classics)

3. THE CALL OF THE WILD (DOVER CHIL

4. THE CALL OF THE WILD (DOVER CHIL