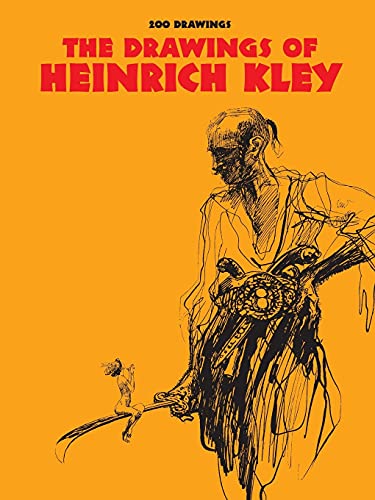 Irreverent, bizarre, whimsical, and mocking, Kley's pen-and-ink drawings rank among the most imaginative satirical cartoons of all time. This compilation draws upon his Skizzenbuch I and II (1909–10) to present 200 fantastic images that blend savage humor with brilliant draughtsmanship in sketches of humans, animals, and curious combinations of the two.

This is a new unabridged edition of the two sketchbooks by Heinrich Kley, one of the greatest cartoonists and social satirists of modern times. Kley's drawings combine savage humor that cuts to the bone with unbelievably brilliant draughtsmanship. Several of these sketches have been reprinted time and again, and probably everyone has seen at least one. But until now the main body of Kley's work has been almost completely unavailable, and it has been impossible to savor the full richness of his mocking irony.
First published in Munich in 1909 and 1910, Kley's sketches reflected the growing tensions of the twentieth century and the strong undercurrent of disillusionment that Europe was prey to. His frantic, posturing, iconoclastic brainchildren lash mercilessly at bureaucracy, militarism, false Gemütlichkeit, the eccentricities of reformer, the ballast of majesty, and many more facets of a weary civilization. Anyone interested in caustic social satire will find that these vivid, unforgettable cartoons are still among the most enjoyable and pungent examples of this art. Kley's bizarre hybrid and bestial forms (in the long tradition of European visionary fantasy exemplified by Hieronymus Bosch, the elder Breughel, and Goya) give them far more depth and levels of meaning than other works in the genre.
Kley's imaginative universe and strongly individual style have often been imitated by later artists, but none has captured his acid depths. His nervous line quality and extraordinary technique are still inspirations for artists and cartoonists who want to learn how to draw line figures that practically leap off the page.
A new introduction, specially written for this edition, gathers together the available information on Kley's life and training, the formative elements in the present sketches, and the other facets of his art.
First unabridged and unaltered republication of Skizzenbuch, 1909, and Skizzenbuch II, 1910. Two books bound as one.

Heinrich Kley (1863-1945) abandoned painting to focus on his pen-and-ink drawings. Steeped in sarcastic wit, his images appeared in the German magazines Jugend and Simplizzimus before debuting in the United States, where they inspired the Disney artists who created the film Fantasia.