Items related to An Introduction to the Principles of Morals and Legislation...

Bentham, Jeremy An Introduction to the Principles of Morals and Legislation (The collected works of Jeremy Bentham) 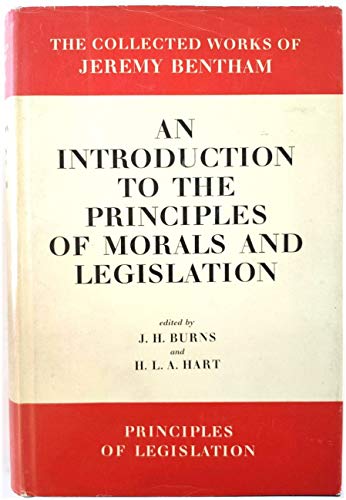 Dr Schofield's editorial work is exemplary, and greatly assists the reader. The editor's labours and scholarship are much to our profit. These writings add significantly to our knowledge of Bentham ... the paperback reissue of the definitive text of the Collected Works edition is very welcome. (Peter Nicholson, University of York, Political Studies, Vol. 45, No. 1, March '97)

The new critical edition of the works and correspondence of Jeremy Bentham (1748-1832) is being prepared and published under the supervision of the Bentham Committee of University College London. Despite his importance as jurist, philosopher, social scientist, and leader of the Utilitarian reformers, the only previous edition of his works was a poorly edited and incomplete one brought out within a decade or so of his death. Eight volumes of the new Collected Works (five of correspondence and three of writings on jurisprudence) were published between 1968 and 1981 by the Athlone Press. A further six volumes of correspondence and eleven other works have been published by Oxford University Press since 1983. Work is currently being undertaken on further volumes of correspondence, and writings on political reform at the time of the French Revolution, on the Poor Laws, on Language and Logic, and on Evidence and Judicial Procedure. The overall plan and principles of the edition are set out in the General Preface to The Correspondence of Jeremy Bentham, volume 1. It is now estimated that the edition will run to some sixty or so volumes.

1. An Introduction to the Principles of Morals and Legislation (The collected works)

Book Description Athlone Pr, 1970. Hardcover. Condition: GOOD. Spine creases, wear to binding and pages from reading. May contain limited notes, underlining or highlighting that does affect the text. Possible ex library copy, will have the markings and stickers associated from the library. Accessories such as CD, codes, toys, may not be included. Seller Inventory # 3351200531

2. An Introduction to the Principles of Morals and Legislation

Book Description The Anthlone Press, 1970. Condition: Good. This is an ex-library book and may have the usual library/used-book markings inside.This book has hardback covers. With usual stamps and markings, In good all round condition. Dust Jacket in good condition. Please note the Image in this listing is a stock photo and may not match the covers of the actual item,1000grams, ISBN:0485132117. Seller Inventory # 8185382

3. An Introduction to the Principles of Morals and Legislation

4. An Introduction to the Principles of Morals and Legislation (The collected works)