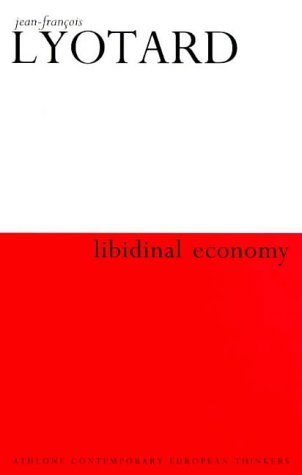 This is a philosophical development of the Freudian concept of "libidinal economy" and one of Lyotard's most important works. In part a response to Deleuze and Guattari's "Anti-Oedipus" (English translation Athlone, 1984), it can also be seen as culminating a line of modern thought ranging from de Sade, Nietzsche and Bataille, to Deleuze, Klossowski, Irigaray and Cixous. It is thus important in the context of modern French philosophy, and also in its relevance to contemporary thinking on a broad range of questions, including sexual politics, semiotics and literary studies. Jean-Francois Lyotard's other translated works include "The Postmodern Condition", "Just Gaming" and "The Differend".

Buy Used
Condition: Good
Shelfwear to the book. Has some... Learn more about this copy

Book Description Condition: Good. Shelfwear to the book. Has some underlining/highlightling from previous owner which does not effect reading. Previous owners Inscription inside cover. Seller Inventory # 024182-6

Book Description Paperback. Condition: Very Good. Libidinal Economy (Bloomsbury Revelations) This book is in very good condition and will be shipped within 24 hours of ordering. The cover may have some limited signs of wear but the pages are clean, intact and the spine remains undamaged. This book has clearly been well maintained and looked after thus far. Money back guarantee if you are not satisfied. See all our books here, order more than 1 book and get discounted shipping. . Seller Inventory # 7719-9780485120837