Items related to The Novels of George Eliot

The Novels of George Eliot 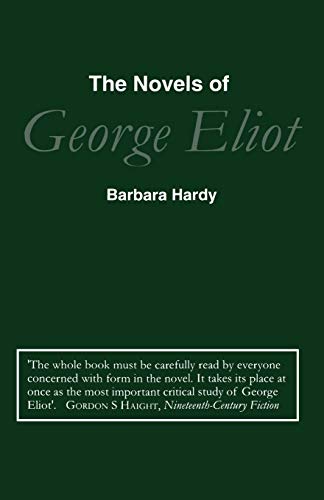 Barbara Hardy's Novels of George Eliot is a classic study of Eliots's outstanding powers as a great formal artist. The book's continuing appeal is due not simply to the perceptiveness and freshness of its writing but to the fact that form is interpreted in the widest sense to include whatever is relevant to the novels as organised, articulated, imaginative wholes and also as the direct expression of George Eliot's profound analysis of the human condition.

Barbara Hardy is a poet, autobiographer and novelist, as well as a critic whose books include three on George Eliot and three on Dickens. She is Emeritus Professor at Birkbeck, University of London, Honorary Professor of the University of Wales, Swansea, and Fellow of the Royal Society of Literature and the British Academy.

1. The Novels of George Eliot (Paperback)

3. The Novels of George Eliot

8. THE NOVELS OF GEORGE ELIOT

Book Description The Athlone Press, 2020. Paperback. Condition: NEW. 9780485120059 This listing is a new book, a title currently in-print which we order directly and immediately from the publisher. Print on Demand title, produced to the highest standard, and there would be a delay in dispatch of around 10 working days. For all enquiries, please contact Herb Tandree Philosophy Books directly - customer service is our primary goal. Seller Inventory # HTANDREE0715704