Items related to The Language of the Third Reich: "LTI (Lingua Tertii...

The Language of the Third Reich: "LTI (Lingua Tertii Imperii)" - A Philologist's Notebook 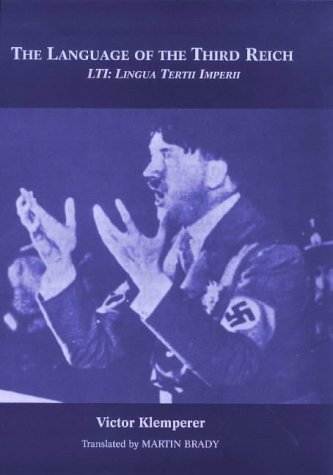 A Jewish professor of Roman studies, Victor Klemperer lived throughout the Nazi period in conditions of great deprivation and, intermittently, of deadly peril. This text is a linguistic diary kept secretly by Klemperer from 1933-45 in which he recorded the characteristic literary forms and usages of the Nazi regime and analysed the impact of Nazism of German language, life and culture.

Victor Klemperer, a front-line veteran of the First World War, became Professor of French Literature at Dresden University. He was taken from his university in 1935 because he was Jewish, and only survived because of his marriage to an Aryan.

1. The Language of the Third Reich: Lti, Lingua Tertii Imperii: A Philologist's Notebook

Book Description Athlone Pr 2000-06-01, 2000. Hardcover. Condition: Good. No Jacket. Item is in good condition. Some moderate creases and wear. This item may not come with CDs or additional parts including access codes for textbooks. This may not have a dust jacket. Might be an ex-library copy and contain writing/highlighting. Photos are stock pictures and not of the actual item. Seller Inventory # DS-0485115263-3