Items related to Imperfect Creatures: Vermin, Literature, and the Sciences...

Imperfect Creatures: Vermin, Literature, and the Sciences of Life, 1550-1750 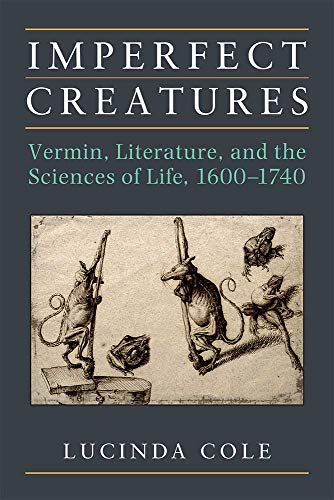 Lucinda Cole’s Imperfect Creatures offers the first full-length study of the shifting, unstable, but foundational status of “vermin” as creatures and category in the early modern literary, scientific, and political imagination. In the space between theology and an emergent empiricism, Cole’s argument engages a wide historical swath of canonical early modern literary texts alongside other nonliterary primary sources (including under-examined archival materials) from the period, including: William Shakespeare’s Hamlet and Macbeth, Christopher Marlowe’s The Jew of Malta, Jonathan Swift’s Gulliver’s Travels, Daniel Defoe's Robinson Crusoe and Journal of the Plague Year, Giambattista Della Porta’s Natural Magick, William Harvey’s Anatomical Exercises on the Generation of Animals; Thomas Willis’ Cerebri Anatome and Of the Soul of Brutes, and Robert Boyle’s Free Inquiry into the Vulgarly Receiv’d Notion of Nature.

As Cole illustrates, human health and demographic problems—notably those of feeding populations periodically stricken by hunger, disease, and famine—were tied to larger questions about food supplies, property laws, national identity, even the theological imperatives that underwrote humankind's claim to dominion over the animal kingdom. In this context, Cole’s study indicates, so-called “vermin” occupied liminal spaces between subject and object, nature and animal, animal and the devil, the devil and disease—even reason and madness. This verminous discourse formed a foundational category used to carve out humankind’s relationship to an unpredictable, a-rational natural world, but it evolved into a form for thinking about not merely animals but anything that threatened the health of the body politic—humans, animals, and even thoughts.

“For the last decade Lucinda Cole has been an important figure in animal studies, and here she carries the debate about human-animal relations into new territory by considering them as ‘heterarchical’—that is, unfixed and mobile, provoking between species unintended exchanges of properties, conduct, and ‘rank.’ The ‘human,’ as she points out at the end of Imperfect Creatures, ‘is not an absolute standard or unmarked term.’”—Jonathan Lamb, Vanderbilt University

“This book provoked me to think beyond, as well as with, the claims it advocates. Cole wittily and aptly terms the reading practice that emerges from this altered focus ‘reading beneath the grain.’ The results are both welcome and remarkably generative, and this work is likely to be widely cited in subsequent discussions. Cole’s argument is both lucid and ambitious, blending attentive reading with solid scholarship in graceful, accessible prose that engages productively with an array of important theoretical positions in literary, science, and animal studies.—Richard Nash, Indiana University

“Lucinda Cole’s engaging book expands the repertory and shapes the direction of the field of animal studies. This work offers us a new subject of inquiry—in animals regarded as ‘vermin’—and it uses these ‘imperfect’ creatures to extend our understanding of the significance of shared community. Animal studies has advanced our understanding of the community or commonality of beings, human and non-human, through a range of methods and materials. Cole’s book reveals the ways in which the rats, lice, frogs, dogs, and other ‘vile’ beings in Shakespeare, Shadwell, Cowley, Defoe, and others demonstrate a heterarchical approach to human/non-human difference. These ‘vile’ animal beings extend our understanding of the ways in which the engagement with non-human beings systematically raises, tests, and interrogates structures of hierarchy and expectations of anthropomorphism.—Laura Brown, Cornell University

“By taking early modern vermin seriously, Imperfect Creatures reveals the crises and insecurities that these ubiquitous creatures could evoke in humans. Ranging widely across time and genre, this insightful and beautifully crafted study lifts animal studies to a new level of analysis and theoretical sophistication, while never losing sight of its human and animal actors.”—Anita Guerrini, Oregon State University

Lucinda Cole is Associate Professor of English and Director of Women’s and Gender Studies, University of Southern Maine, USA.